Ricketts gets the win in triple jump 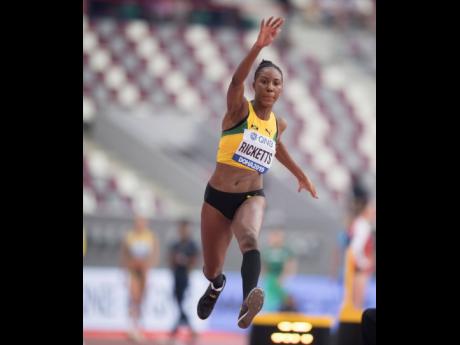 WORLD championships triple jump silver medallist, Shanieka Ricketts, was Jamaica’s only winner at yesterday’s Herculis Wanda Diamond League in Monaco. Ricketts registered a mark of 14.29 metres in a three-way final jump for the event and claimed victory when defending World champion Yulimar Rojas of Venezuela and Patricia Mamona of Portugal both fouled their attempts.

Under the new Diamond League format introduced this year for field events, the top three athletes face off after five attempts. Previous marks are dropped. Ricketts came into that final stage as second best with 14.75m behind Rojas with 15.12m. Mamona had a personal best and National record of 14.66m to close out the top three. The other Jamaican in the event, Kimberly Williams, finished fifth with a best of 14.41m.

Ricketts was happy with her victory.

“I am very pleased I was able to get a good series out tonight and that shows us where we are with our preparations. So I am looking to build up on what we did tonight ahead of Tokyo in three weeks,” said Ricketts. “With the final three rule I really have to dig deep because this is the jump that matters and counts so this is pushing me to stay on top of my game,” she concluded.

Jamaica had two other top three placings. Tajay Gayle was second in the men’s long jump while Shelly-Ann Fraser-Pryce was third in the women’s 200. Natoya Goule had a fourth-place finish in the women’s 800m.

Gayle, who was hoping to pick up his second win in a row following success in Stockholm on Sunday, had to settle for the runner-up spot in the men’s long jump despite producing a season’s best 8.29 metres, the longest jump after five attempts. Gayle and Thobias Montler of Sweden, who was third with a personal best 8.27m, failed to register a mark with their final efforts in the jump-off as world leader Miltiadis Tentoglou of Greece, with 8.24m, took the win.

Following her second-place finish in Hungary in the women’s 100m in midweek behind compatriot Elaine Thompson-Herah, Fraser-Pryce placed third in the women’s 200 metres. After a blazing start where she came off the curve in front, Fraser-Pryce, the 2019 World 100m champion, failed to keep up that momentum towards the end as she was first passed by Marie-Josee Ta Lou of Cote d’Ivoire and the slow-starting Shaunae Miller Uibo of the Bahamas. Miller-Uibo out-leaned Ta Lou at the finish line to get the win in 22.23 seconds. Ta Lou recorded a season’s best 22.25 for second with Fraser-Pryce, third in 22.48.

Goule, who took the lead with just over 150 metres to go on the final lap of the women’s 800 metres, could not hold on to her lead and had to settle for fourth in 1:57.35 minutes. The top three all ran personal best times. Great Britain’s Laura Muir won in 1:56.73 while her compatriot Jemma Reekie was second in 1:56.96. American Kate Grace took third in 1:57.20.