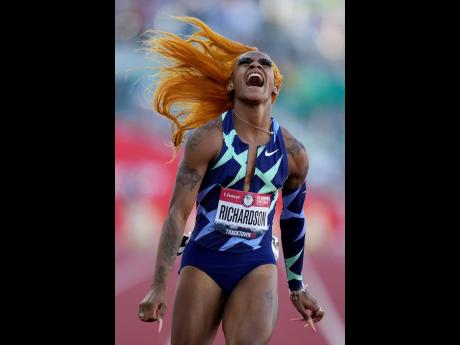 Moving to dispel notions regarding sport-related suspensions for marijuana use, the World Anti-Doping Agency (WADA) stated clearly that tests related to its component, cannabinoids, are only done “in competition” and the US has been strongly supporting its inclusion on the world body’s Prohibited List.

The issue, at this time, is at the forefront of discussions concerning cannabinoids’ inclusion on WADA’s Prohibited List, following the 30-day suspension of star United States sprinter, Sha’Carri Richardson.

The 21-year-old, who recently clocked an astonishing 10.64-second personal best over 100 metres – the sixth-fastest wind-legal time – is the fastest American female athlete alive and was considered among the medal contenders for the Olympic Games in Tokyo, Japan. Many argued she should not have been forced to miss the Olympics for smoking weed (also called ganja in Jamaica) because it is used commonly and legally in some countries globally and some states across America; especially as she is grieving the passing of her biological mother.

Dope testing of the athlete by the United States Anti-Doping Agency (USADA) during the US Track and Field Championships revealed cannabinoids above allowable levels stated on WADA’s Prohibited List, which is updated yearly.

“It is important to note that cannabinoids are prohibited ‘in-competition’ only, meaning athletes are only tested for cannabinoids while they are competing, which is defined in the Code as ‘the period commencing at 11:59 p.m. on the day before a competition in which the athlete is scheduled to compete through the end of such competition and the sample collection process related to such competition’,” stated Witolda Banka, from the Office of the President, WADA.

“Therefore, the Prohibited List has no impact on whether an athlete chooses to use cannabis at any other time of the year for recreational or other purposes. Also, the decision limit for triggering a positive test for cannabis is 180ng/ml,” he elucidated.

The WADA official’s lettered response, on July 10, was triggered by a corresponding July 2 letter from US lawmakers, Jamie Raskin, chair, and Alexandria Ocasio-Cortez, vice chair, Subcommittee on Civil Rights and Civil Liberties, that asked WADA to overturn the USADA ban on Richardson and clear the path for her participation in Tokyo.

However, WADA pointed out that the “… testing of Ms Richardson and her resulting suspension were administered and adjudicated by USADA. WADA is not a party to that particular matter and, therefore, simply is not in position to vacate the results of Ms Richardson’s test in Oregon, the 30-day suspension imposed by USADA, nor the decisions of USA Track and Field regarding her participation at the Tokyo Olympics.”

He added: “According to the current science, an athlete who occasionally uses cannabis, even days before a competition, would be extremely unlikely to test positive with this decision limit. Thus, athletes’ civil liberties are not burdened by cannabinoids being included on the Prohibited List for in-competition testing only,” explained Banka.

Science and medical experts have determined that the drug satisfies at least two of the three criteria set forth in the Code.

1. It has the potential to enhance or enhances sport performance;

2. It represents an actual or potential health risk to the athlete;

3. It violates the spirit of sport.