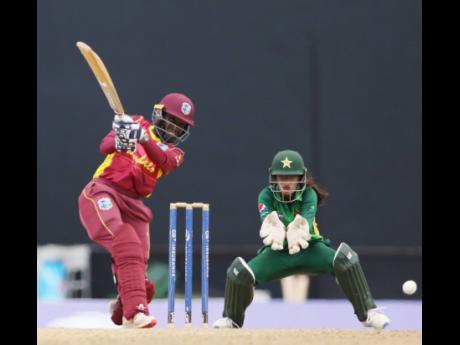 Despite a gritty half-century from Kyshona Knight, the West Indies Women’s team went down by four wickets to Pakistan in the fourth One Day International (ODI) at North Sound in Antigua yesterday.

Knight stroked a brilliant 88 from 140 balls with eight fours and a six in the West Indies total of 210 all out in 49 overs and four deliveries. Omaima Sohail then hit a resilient 61 from 89 balls to guide Pakistan to 211 for six in 48 overs and three deliveries to secure their first win for their senior team, which now trails 3-1 in the five-match series.

The West Indies total could have been a lot healthier after they were asked to bat first as they were in command at one stage at 171 for three in the 40th over, thanks to a 142- run third-wicket stand between Knight and captain Stafanie Taylor, who fell one run short of a half-century.

The pair came together after Fatima Sana removed opener Hayley Matthews for one and Deandra Dottin for 19, at 29 for two in the eighth over.

Knight and her captain then stuck in a batted responsible to take the host to a formidable position before Taylor, who brought up her 8,000th international run, was caught behind off Nashra Sandhu for 49 after hitting five fours in her 77-ball knock.

The fall of Taylor’s wicket then brought about a mini-collapse as the West Indies lost their last eight wickets for just 39 runs.

With an attainable total on the board, Pakistan went about their run chase purposefully and put on 32 for the first wicket before Hayley Matthews sent back opener Muneeba Ali for 19.

Shakera Selman then bowled captain Javaria Khan for 10 to leave the visitors 44 for two in the 10th over. However, opener Sidra Ameen and Sohail quickly restored parity as they put on 81 runs for the third wicket.

Ameen eventually fell for 41, and Sohail was bowled by Chinelle Henry for 61. However, Nida Dar, with 29 not out, saw the visitors over the line.

Matthews, who picked up her 50th ODI wicket in the match, finished with two wickets for 46 runs and Selman bagged two for 34.