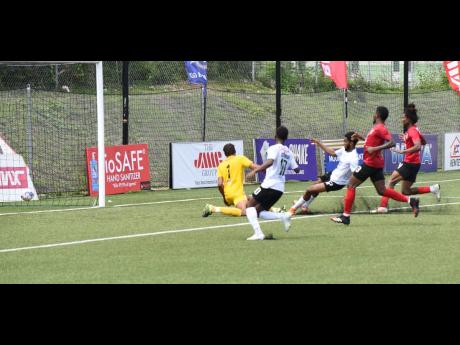 Having netted the first double in this season’s Jamaica Premier League (JPL) competition, Cavalier’s striker Shaniel Thomas has now set his sights on winning this year’s Golden Boot award in the tournament.

Thomas netted his goals in the 59th and 79th minutes as Cavalier cruised to a 3-0 victory over Arnett Gardens at the UWI/JFF Captain Horace Burrell Centre of Excellence in St Andrew yesterday. Melvin Doxilly also scored for Cavalier in the 64th minute.

Thomas, who was scoring for the first time this season after four matches, told The Sunday Gleaner that he has been working hard in training on his finishing and he is happy that he is finally off the mark in the competition.

“This is a wonderful way to break my duck and this will now set up things for me to go on and win the Golden Boot,” Thomas said.

“I have a lot more goals in my feet and I am feeling really good because I think that I am the first person to score two goals in a game in the competition this season, so I think that is a wonderful accomplishment for me.

“I have been putting in a lot of work and so it is just about being consistent because I want to reach double figures by the end of the season and I am just going to continue to put in the hard work in training every day.”

The first half was entertaining as both teams created a number of clear-cut chances but poor finishing from their attackers resulted in a nil-all draw at the break.

Cavalier came out firing on all cylinders in the second half with the swift one-two passing and clever off the ball movement.

They were rewarded when Thomas arrived in the centre of the box to tap in a low cross from Ronaldo Webster past custodian Chadeem Rodriques.

The Arnett Gardens players went asleep and Doxilly took advantage of this as he ran between two defenders to volley a beautiful overhead kick past Rodriques.

Cavalier continued to run circles around their opponents in the second half and Thomas wrapped up the three points for his team with an easy tap from point-blank range.

Thomas is now two goals behind the competition’s leading scorer Oquassa Chong, who netted a 31st-minute penalty in Harbour View’s 2-0 victory over Dunbeholden in the second match of the double-header. Tevin Scott scored the second goal for Harbour View in the 44th minute. Harbour View ended the match with 10 men after Tarick Ximines was shown a second yellow card in the 90th minute.

Arnett Gardens’ head coach Alex Thomas said his team ran out of steam in the second half because they failed to match their opponents on all fronts.

“It was a solid first half from us, but in the second half, we came out flat and we gave up some simple goals,” he said. “These are young players and they have to learn from their mistakes and ensure that we correct them as we move forward in the competition.”

Meanwhile, Harbour View, who are unbeaten this season, were recording their second win of the season.

Ludlow Bernard, coach of Harbour View, said he was happy with his team’s performance because they managed the game well, especially in the second half.

“Everything that we planned basically worked out for us,” he said. “We went at the opponents early and we got the first goal of the game because I am confident of our organisational structure, which seems to be getting a little bit better as the game goes on,” he said.

Dunbeholden’s Harold Thomas said his team was poor throughout the match.

“I think our performance was poor because in the first 10 minutes, we got chances that could have made the game very competitive, and we just never took them,” he said. “We have been working hard in training but it just didn’t work out for us in this game.”