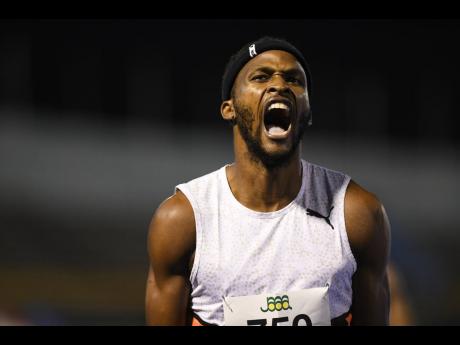 Scroll down the 2021 400m hurdles performance list and you’ll see the name Jaheel Hyde in the number seven slot after his personal best of 48.18 seconds at last month’s National Senior Championships (Trials). Hyde plans to prove that ranking is...

Scroll down the 2021 400m hurdles performance list and you’ll see the name Jaheel Hyde in the number seven slot after his personal best of 48.18 seconds at last month’s National Senior Championships (Trials). Hyde plans to prove that ranking is legitimate by making the final at the Olympic Games in Tokyo.

“I feel really good,” the young man who will lead Kemar Mowatt and Leonardo Ledgister into battle in Tokyo said. “Just can’t wait to get there and just show the world who I am, just in case they forgot, but it’s good. It’s been a long road, long, long road, years; but it’s finally coming back together.”

With Swept Track Club coach Okeile Stewart polishing his technique, the 2014 and 2016 World Athletics under-20 champion is ready.

“Going to the Games, I feel much better now than before Trials, you know, in terms of how my body feels,” he said. “Mentally, you know, of course, I have a lot more confidence now, so at the Games, I just want to take it round by round. Get a good semi-final, because chances are my semi-final will have to be my final and once I get myself into the final, I know what I’m capable of, and I know it won’t be easy counting me out.”

“The aim is to get to that finals at that Olympics,” Stewart said, “and from there, to allow his heart to take control, because you know he has a very big heart.”

Leaner due to a new diet, Hyde is eyeing the 48-second barrier.

“I think that I could have done that at the Trials, but I didn’t know how fast I was going because I’ve never ran that fast before. I’ve run 48 before,” he said, in reference to his time of 48.52s to win the 2017 Nationals, “but it’s been four years, so chances are, I forgot the pace and how close I was to 47s.”

Then the 2018 Commonwealth Games bronze medallist looked ahead.

In 2016, Hyde surprised himself by getting to the Olympic semi-finals. His sights are set higher this time.

“Although there are good, quality athletes out there, I think going into the Olympics, I’m top seven in the world. But for the athletes going to the Olympics, I think I’m in the top six, so I just want to go and show that that’s legit.”