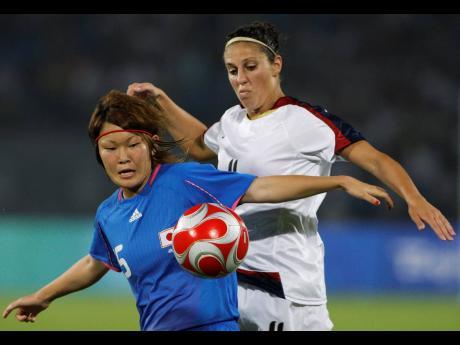 AP
In this August 18, 2008 file photo, Carli Loyd (right) of the United States vies for the ball with Mizuho Sakaguchi of Japan, during the Beijing 2008 Olympics women semi-finals soccer match in Beijing. Older Olympians will be proving that age is just a number in Tokyo.

Much has been made about Carli Lloyd’s age. The American forward will be – gasp! – 39 when the Olympics soccer tournament kicks off. But for all the focus on Lloyd, she is not even going to be the oldest athlete competing in Tokyo.

Meet Formiga, who is a seemingly ageless 43-year-old midfielder for Brazil. She is one of a number of Olympians who are proving that, yep, age is just a number.

“You know, I literally haven’t switched off for 17, 18 years. It’s been hard-core craziness. I’m sure my husband and my family are going to be excited when I’m done playing because I’ll actually get to do things,” said Lloyd, who is in her fourth Olympics.

The oldest Olympic athlete was a Swedish shooter named Oscar Swahn, who was 72 years, 280 days old when he won a silver medal in the 1920 Olympics. But there is a codicil to this distinction. For nearly 40 years, the Olympics awarded medals in the arts. British artist John Copley was 73 when he won a silver medal in “painting and engraving” in the 1948 Games. It was the last Olympics that included art.

The oldest member of the United States team headed to Tokyo is Phillip Dutton, a 57-year-old equestrian who competes in eventing, a combination of dressage, cross-country and jumping. This is Dutton’s seventh Olympics. He won the bronze medal at the 2016 Rio Games to become the oldest US medallist since 1952. He was the oldest American in Rio, too.

First-time sport skateboarding, added in an effort to attract a younger audience to the Olympics, is not only for the young. South Africa’s Dallas Oberholzer will try for gold at 46.

Lloyd is the oldest player on the US soccer team that has the oldest average age – 30.8 – of any US team that has played in the Olympics. Other older players include Megan Rapinoe and Becky Sauerbrunn, both 36.

Ok, no one considers 20-year-olds old. But the US gymnastic team includes several 20-somethings, including Simone Biles, who is 24. Gone are the days of Dominique Moceanu, who was just a 14-year-old sprite when she won gold in 1996.

The average age of the US team is 20.8, the oldest it has been since 1952. The oldest athlete on the team is MyKayla Skinner, who is also 24 but a few months older than Biles.

“Being older, it’s just been awesome because I feel like with all the experience I’ve had, I feel like my gymnastics has been better than ever, which is super cool,” Skinner said.

But they are all youngsters, really, compared to Oksana Chusovitina of Uzbekistan, who is 46 and competing in her eighth Olympics. She finished seventh in the vault in Rio.

Her age is not the only thing that makes Chusovitina a rarity in the gymnastics world: She is also a mom. Her son is 21, older than many of the athletes she is competing against.

It appears, as of now, that in Tokyo the oldest athlete will be equestrian Mary Hanna of Australia, who is a 66-year-old grandmother competing in her seventh Olympics.

Hanna is also set to become the second-oldest woman to take part in an Olympics, after Great Britain’s Lorna Johnstone, an equestrian who competed in the 1972 games at age 70.