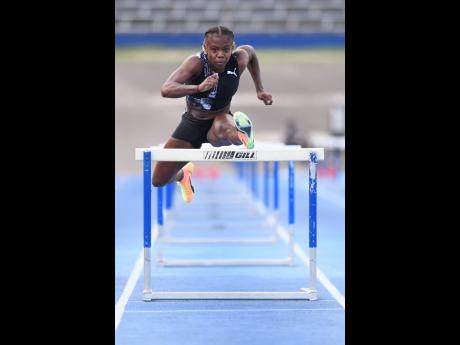 JAMAICA’S WOMEN have done well over the years in the 100m hurdles at the World Athletics Championships, with Brigitte Foster-Hylton and Danielle Williams winning gold medals, while Michelle Freeman and Delloreen Ennis-London have also won medals.

However, the country’s female athletes are yet to be on the podium in the event at the Olympics.

In a few days’ time in Tokyo, national champion Megan Tapper, who will be competing at her second Olympics, along with Yanique Thompson and Britany Anderson, who will be attending their first Olympics, will be hoping to break that jinx and be among the medals.

All three athletes, however, will have to do something extra special to medal, as Puerto Rico’s Jasmine Camacho-Quinn (12.32 seconds), the United States of America’s (USA) Kendra Harrison (12.47s), and Nigeria’s Tobi Amusan (12.48s) are favoured to share the medals.

Making the feat more difficult is the USA’s duo of Christina Clemons (12.51s) and Gabrielle Cunningham (12.53s), plus Great Britain’s Cindy Sember (12.53s), who have all gone faster than the Jamaicans heading to Tokyo.

Twenty-year-old Anderson, a former World Athletics under-18 champion, has a season’s and personal best 12.58s. That makes her the highest-ranked Jamaican 100m hurdler going to Tokyo, as she is at number 10 on the World Athletics list. Tapper, with 12.68s, is ranked 21st, while Thompson is 24th with her season’s best 12.73s.

Like she did at the National Senior Championships, when she scored a major upset to win the title, Tapper could use her lightning start to gain a big advantage, and may be the best bet among the Jamaicans to break the medal drought at these Games.

A few days ago, she showed that she is in immaculate form, winning the event at the America Track League in California, in a wind-aided 12.48s. Despite the wind being over the allowable limit, the time could provide a big psychological boost for Tapper. With her confidence now soaring, Tapper looks in good form and could produce something very special in Tokyo.