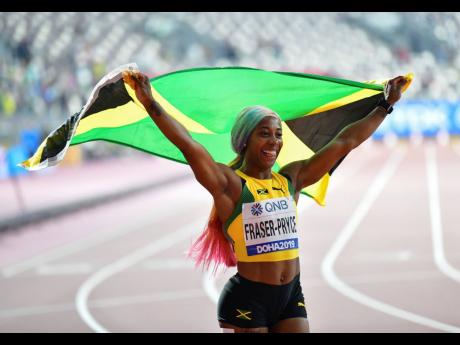 MUCH-LOVED and decorated track and field athlete Shelly-Ann Fraser-Pryce and first-time qualifier boxer Ricardo Brown will be Jamaica’s flag bearers when the COVID-19 pandemic, year-delayed Tokyo 2020 Olympic Games officially get under way with its traditional glitzy parade of countries and opening ceremony today at the Olympic Stadium in Tokyo, Japan.

The ceremony will be held without spectators as a measure to prevent the spread of coronavirus infections, although some officials, guests, and media will attend.

A total of 11,091 athletes are expected to compete at the Games in 41 different sports and 339 events.

Brown, a super heavyweight boxer, is the first to represent Jamaica in boxing at the Games since 1996 in Atlanta. The 31-year-old, known widely as ‘Big 12’, won a bronze medal at the Pan American Games in Lima, Peru, in 2019 and is ranked number four in the Americas in his weight class.

As COVID-19 wreaked havoc on the Tokyo Olympics qualifying events, points accumulated from that and other events such as the last two World Boxing Championships were used to approve Tokyo status for boxers, and Brown earned his ticket via that route.

Brown numbers among five other sporting disciplines that will be leading Jamaica’s charge alongside the powerful and renowned track and field contingent leading Jamaica’s medal chase. Swimming sensation and leading contender on the sport’s Grand Prix circuit Alia Atkinson is a five-time Olympian carrying hopes for medals in the pool with Keanan Dols. Yona Knight-Wisdom, in his second Olympic Games, also competes in the pool in the discipline of diving, while Ebony Drysdale-Daley in judo, and Danusia Francis, artistic gymnastics, will be competing off the track.

On the track, defending sprint double champion Elaine Thompson Herah, with a personal best 21.78 seconds and season’s best 22.02s, has been running into good form lately and will be looking to repeat her glorifying performances from Rio 2016, where she took the 100 and 200m gold medals.

Jumpers Tajay Gayle, the 2019 World champion, and Shanieka Ricketts and Kimberly Williams are also expected to produce strong performances in the sand pits.

The opening ceremony will air at 5:55 a.m. Jamaica time.