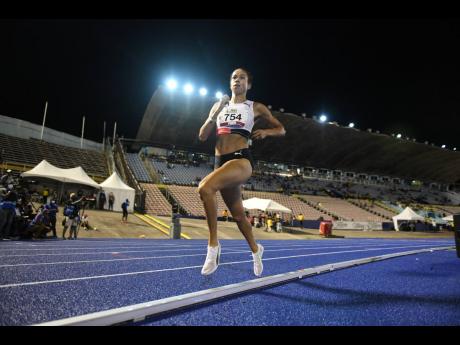 Tokyo, Japan:
Jamaican middle distance athlete Aisha Praught-Leer will compete in the 1500m event at the Tokyo 2020 Olympic Games despite tearing her meniscus on Sunday.

Praught-Leer, who is looking to compete in her second Olympic Games after her appearance in the final of the 3000m steeplechase at the 2016 Rio Olympics, has decided to delay surgery, which she suffered in what is being called a freak training accident.

"I will line up in Tokyo," Praught-Leer said via her Twitter account. "I want to keep believing in the possibility of achieving the wild dreams I store deep in my heart. The reality is they will not happen in Tokyo - running to my ability is simply not possible on a knee without stability. This is the most challenging reality I have faced in my career.

"I understand this is sport — just sport. I know the truth that I am more than an athlete. But this sport means everything to me. This is my life's work, my purpose and my first true love. I am heartbroken."

Praught-Leer had been training in Switzerland ahead of the Games.

She becomes the second Jamaican to suffer a serious injury ahead of the Tokyo Olympics, after gymnast Danusia Francis' recent setback, which has forced her out of the artistic gymnastics competition.

Praught-Leer will receive a cortisone injection when she arrives in Tokyo to ease the pain in the area.

Praught-Leer is the reigning Commonwealth Games champion in the 3000m steeplechase and also has a 1500m Pan American Games silver medal from the 2019 event.

The meniscus is cartilage that acts as a shock absorber between the shinbone and thighbone. It can be torn by a sudden twist of the knee while bearing weight. It is one of the most common knee injuries.