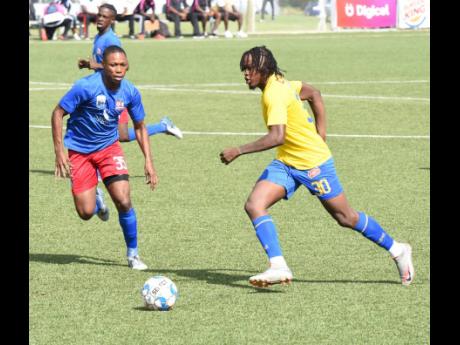 Harbour View head coach Ludlow Bernard has issued the charge to his youthful squad for the remainder of the season: Embrace the title hunt.

It is a challenge that they hope will gather further momentum when they take on Vere United in the first game of a Jamaica Premier League double-header at 1 p.m. at the UWI/Captain Horace Burrell Centre of Excellence.

The match will be a clash of two of the three unbeaten teams left in the league this season. Both teams are on eight points with two wins and two draws each although the ‘Stars of the East’ are currently in second place because of a superior plus four goal difference. Harbour View have the advantage of an in-form striker in young Oquassa Chong who is the league’s leading scorer with four goals from all four games played so far this season. With both Harbour View and Vere United a point adrift from league leaders Portmore United, Bernard says that having a winning mindset will be the next step in his team’s continuous development as players

“The objective is to challenge and the objective is to win. Although we probably have a youthful squad, it’s very important that we inculcate a winning mentality in these guys if they are going to be the future,” Bernard said after their 2-0 win over Dunbeholden on Saturday. “We don’t have a problem executing that kind of approach and so far we have been fortunate.”

After their 3-1 win over Humble Lion in the Clarendon derby on Sunday, head coach Donovan Duckie said that he is keen to keep his team’s feet on the ground regarding their expectations for the rest of the campaign. They will be missing the services of midfielder Shamar O’Conner who was sent off in the derby after picking up a second yellow for time-wasting. Although they got the result, Duckie said that concentrating on all phases of the game is important and said it was lacking in the goal that they gave up.

“It’s a simple plan for us every week. We are concerned about the phases of the game. We are defending a set piece from the side and our ball-winners are not on frame,” Duckie said post-game. “How can we win the ball? So those are the kind of things that we think about.”

Meanwhile, struggling clubs Dunbeholden and Molynes United will face each other in the second game at 3:30 p.m. with both teams looking to jump-start their respective campaigns. Dunbeholden are in ninth place with three points while Molynes United are in 10th place with two. Dunbeholden head coach Harold Thomas is hoping for a better performance in his third game in charge and says that he still believes that they can turn in results.

“I have been in this game long enough to know that you are not going to see improvement in two weeks,” Thomas said after their 2-0 loss to Harbour View. “But I’m positive (we can get better).”