Dols ready to inspire next generation of swimmers 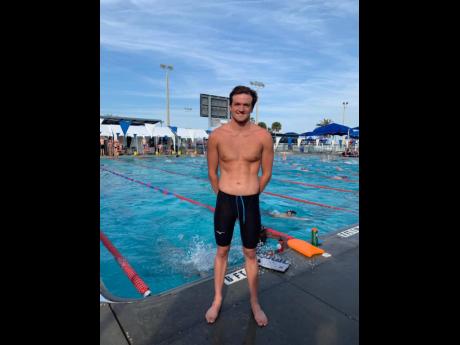 With two Jamaican swimmers set to match strokes with the best on the planet at the Tokyo 2020 Olympic Games, Keanan Dols, who joins ever-present Alia Atkinson as the island’s qualifiers at the event, believes their presence will help to continue encouraging greater participation in the sport among young Jamaicans.

Dols will be competing in his first Olympic Games and will line up in the men’s 200m Individual Medley and 200m Butterfly events, while Atkinson, who is getting ready to make her fifth appearance at the Games, will feature in the women’s 100m breaststroke.

Dols, who is celebrating his 22nd birthday today, is coming off a season that saw him lower his own national record in the 200m IM to 2:02.15 at the Pro Swim Series in California in April, to meet the Olympic ‘B’ qualifying standard of 2:03.26.

“It’s super exciting and a dream come true. This has been the goal for a very long time and it’s amazing to have achieved it. I’m very excited to compete in just a few days,” Dols told The Gleaner.

Jamaica has qualified multiple swimmers at all but one of the last six Olympic Games, with Atkinson being the island’s lone competitor in the pool at the 2012 Games in London.

Dols believes this is further evidence of the success of the sport and its local participants at the highest level and thinks it will pull more talent into the discipline.

“I hope that it shows that there are opportunities to be had in the higher levels of swimming. Far too often we see young Jamaicans stop swimming at 17 to 18 years old and hopefully our participation at these Games can inspire young swimmers to dream big and know that the opportunities are there for them,” said Dols.

GOING FOR A BETTER PERSONAL BEST

Encouraged by recent performances and his showing in training, Dols is looking to further adjust the national record in the 200m IM and better his personal best in the 200m butterfly.

“At my last meet at the end of June, I went in season best times in both of my events, which was very encouraging and since then, training has continued to go well, so I am anticipating to continue that trend,” said Dols.

“The goal is to do personal bests in both of my events, the 200m butterfly and 200m IM and set new national records in both of them,” he added. “I think that I’m in a great spot physically and am confident that I will be able to do that.”

Meanwhile, Dols, who arrived in Tokyo on Sunday, has been enjoying the experience of his first Olympic Games and is now simply eager to get going with his competition.

“It’s been an amazing experience so far. The village and the competition venue are incredible. It’s been great to meet the other Jamaican athletes and support staff that are already here,” Dols shared.