Boyz looking to ‘finish things off’ 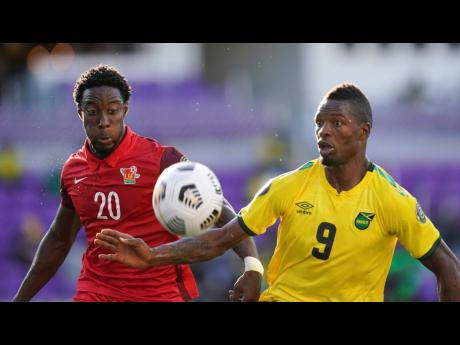 AP
Jamaica’s forward Corey Burke (9) challenges for the ball with Guadeloupe defender Stevenson Casimir (20) during the first half of their CONCACAF Gold Cup Group C soccer match on Friday, July 16, in Orlando, Florida.

National senior men’s assistant football coach, Paul Hall, says clinical finishing will be key to their chances of a fourth straight semi-final appearance, when the Reggae Boyz face the United States in the 2021 CONCACAF Gold Cup quarter-final at the AT&T Stadium in Arlington, Texas, at 8:30 p.m. Jamaica time.

By virtue of finishing runners-up in Group C, the Reggae Boyz will face a young, yet difficult United States squad that managed to finish group play unbeaten with three straight wins. The Reggae Boyz qualified for their fourth consecutive Gold Cup quarter-final on the back of two wins, as well as a 1-0 defeat to Costa Rica in their final group game on Tuesday.

Hall was pleased with the way the team attacked Costa Rica relentlessly, despite not getting the desired result; and said the main focus in training has been to sharpen the end product, scoring, which will put them in good stead for tonight’s encounter.

“If you look at the game the other day, we wanted the Boyz to be able to finish off their positive play. We’ve been working really hard in getting the ball into midfield and making that connection between the forwards and the defence and it’s important that once we get into those areas it’s important that we finish things off, which is probably the only part of the other day that was disappointing,” Hall said. “So we need to work on that, and that’s what training is for. And if we can get these players finishing off these positive moves then we are going to be in a good place.”

Jamaica had dominated possession (54 per cent to -46 per cent and had 19 shots with 11 on target, while Costa Rica only had five shots, with one target.

While pleased with the results of training so far, Hall said that constant fine-tuning will make the difference.

Fulham striker Bobby Reid rejoined the team for full training and is available for selection, after medical reasons ruled him out of the last two games, as well as training activities, with the team. Along with Reid, Bayer Leverkusen striker Leon Bailey, Shamar Nicholson and Corey Burke will be leading Jamaica’s charge for goals.

The preparations have all been towards Whitmore’s goal of another appearance in the final, as explained in his pre-match press conference against Costa Rica. Whitmore noted that the quarter-final opponent would “not change their overall plan”.

It is a commitment that the team and staff have shared, according to team manager Roy Simpson, who says they are determined to overcome any obstacle to finally capture the nation’s first continental title.

“We believe that we should win and the focus on everybody is just to make this happen. There are going to be situations that would want to seem to derail us, but what we have done as a group is that whatever hurdle we have faced together, we go over it and move on,” Simpson said. “But again it’s just the whole focus and commitment of everybody and the responsibility that we take seriously to the people of Jamaica.”