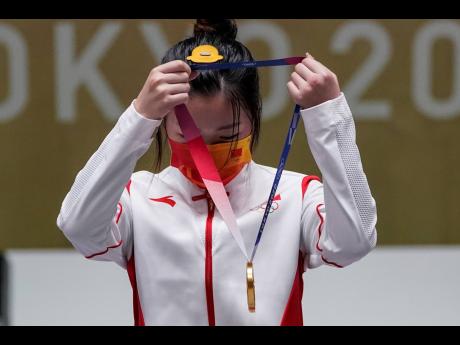 AP
Yang Qian of China puts on her gold medal after the women’s 10-metre air rifle at the Asaka Shooting Range, during the 2020 Summer Olympics in Tokyo, Japan, yesterday.

Hardly half a day passed before politics, the pandemic and blistering heat impacted events across the Tokyo Olympics.

Yang overtook Anastasiia Galashina of Russia to win the first gold medal of the Tokyo Games in the women’s 10-metre air rifle yesterday. Her last shot was her worst of the finals, but still rallied her past Galashina with an Olympic-record score of 251.8. Switzerland’s Nina Christen took bronze.

“It’s unbelievable that I can be here,” Yang said through an interpreter. “I was really nervous. The competition was really tight, but I’m so happy that I could win.”

Galashina led Yang by 0.2 points when they fired almost simultaneously on their last shots. The limited crowd at Asaka Shooting Range let out gasps as the scores were posted a split second later.

Yang, a 21-year-old who qualified sixth of the eight medal competitors, missed the innermost circle on her final shot, a 9.8 that she figured would cost her gold.

She looked up to see Galashina missed the two centre rings. The Russian’s 8.9 meant International Olympic Committee (IOC) President Thomas Bach would present Yang the gold medal on a tray – per pandemic protocols – instead of Galashina.

The first event of the Olympic beach volleyball tournament was cancelled because a Czech player tested positive for COVID-19. Markéta Sluková, who tested positive earlier this week, and partner Barbora Hermannova were eliminated from the tournament.

Already empty because of a ban on fans, the venue at Shiokaze Park was eerily still when the match was supposed to start at 9 a.m. yesterday, the only sound coming from the incredibly loud cicadas in the nearby trees.

The Japanese team of Megumi Murakami and Miki Ishii earned the win by default after qualifying for the tournament via the entry reserved for the host country. Officially, the Czechs were marked as ‘Did Not Start’ and their three round-robin opponents will be awarded victories.

Sluková is one of at least three members of the Czech team who have tested positive since their arrival in Japan, including men’s beach volleyball player Ondrej Perusic. The team has said it is investigating if the outbreak of COVID-19 is linked to its charter flight to Tokyo.

An Algerian judo athlete will be sent home after he withdrew from the competition to avoid potentially facing an Israeli opponent.

Fethi Nourine and his coach, Amar Benikhlef, told Algerian media they were withdrawing to avoid a possible second-round matchup with Israel’s Tohar Butbul in the men’s 73 kg division tomorrow. Nourine was to face Sudan’s Mohamed Abdalrasool in the opening round, with the winner facing Butbul, the fifth seed.

The International Judo Federation’s executive committee has temporarily suspended Nourine and Benikhlef, who are likely to face sanctions beyond the Olympics. The Algerian Olympic Committee then withdrew both men’s accreditation and made plans to send them home.

Nourine and Benikhlef attribute their stance to their political support for Palestinians.