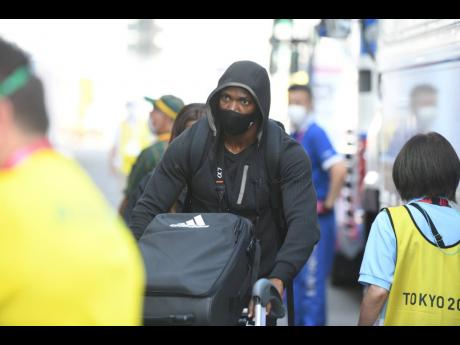 Gladstone Taylor
Sprinter Yohan Blake carries his luggage among the contingent of Jamaican athletes and coaches upon their arrival at the Olympic Village on Friday, July 23, 2021.

Sports physician Dr Akshai Mansingh says that the increase in positive COVID-19 cases among Olympic-related persons in Tokyo means Jamaican athletes must take greater care in ensuring that their Olympic dreams are not derailed because of infection.

The yearlong delayed Tokyo Olympics officially opened on Friday in Japan. However, the number of COVID-19 cases among Olympic-related officials reached 106, with 19 people confirmed to be infected on Friday alone, including three who are staying in the Olympic Village. According to the Japan Times on Friday, the daily tally was the largest since organisers began on July 1 to announce COVID-19 cases related to the Games.

Dr Mansingh says, with the vast number of athletes converging, as well as the number of persons who are still unvaccinated, maintaining the security of the bubble presents an enormous challenge,

“There are people from all over the world (coming to Tokyo) in the middle of a time when people are going through the third and fourth waves of a virus that is very contagious, because the delta variant is out there. So, from that point of view, clearly the risks in this bubble are far higher than anything we have seen anywhere else,” Mansingh told The Sunday Gleaner. “On top of that, you have got people who are vaccinated and people who are not vaccinated and, obviously, you are better off with those who are vaccinated. So you have a lot of vulnerable people because they are simply not vaccinated. So, even in the athlete’s village, it’s not as straightforward as when you have two teams in one place.”

The International Olympic Committee (IOC) estimated in June that more than 80 per cent of Olympic and Paralympic athletes would be vaccinated for the Games.

Jamaica Olympic Association president, Christopher Samuda, said the majority of the delegation has been vaccinated, a cause they have constantly championed from the start, to protect themselves and others in Tokyo.

“We have encouraged them as it regards to the medical evidence that is coming out of the World Health Organization (WHO) that it is minimum risk if you get vaccinated. So we have been encouraging them from the very inception to get vaccination, but we respect each person’s choice and we understand if someone does not wish to take it either by virtue of their medical history or simply by way of choice,” Samuda said. “But we have been very assertive in terms of encouraging athletes to get vaccinated in their own interest, as well as to safeguard the public’s interest in Tokyo.”

With the majority of Jamaica’s athletes now in Tokyo, Dr Mansingh says a greater level of discipline and responsibility will be required as much as possible to avoid infection, which could see them unable to participate. This includes avoiding crowded areas in the village as much as possible, with frequent sanitising and mask-wearing. While hoping that the cases do not increase any further, he said there are strong possibilities that cases during competition will happen.