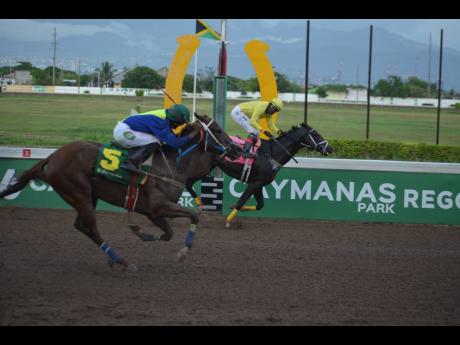 Anthony Minott
TREVOR’S CHOICE (right), with Shane Ellis aboard, holds on and score a narrow win over the Omar Walker-ridden, SOLID APPROACH, in the feature Overnight Allowance race at Caymanas Park yesterday.

TREVOR’S CHOICE took over from early leader VICTORY TURN and thwarted a late mid-track run from SOLID APPROACH to land yesterday’s overnight allowance feature race over five and a half furlongs at Caymanas Park.

Smartly backed at 4-5 with Shane Ellis after a stinging topweight loss at five furlongs straight to course-specialist SALVATION, TREVOR’S CHOICE revelled in the trip at which he prefers, now recording three of his last four wins at the distance.

United States-bred SOLID APPROACH was produced with a storming rail run by Omar Walker, but had to be switched to mid-track inside the last half-furlong to avoid being trapped inside by a lugging VICTORY TURN.

TREVOR’S CHOICE clocked 1:07.0, winning by a diminishing half-length from fast-finishing SOLID APPROACH, who reported off a near four-month lay-off and would have gone closer had she not been forced to switch lanes.

Dane Dawkins and Gary Subratie teamed up to post a jockey-trainer double, GOLDEN BLOOD and MOONOVA, in the third and seventh races, respectively.

Dick Cardenas also rode a two-timer, ASHLEY’S GLORY and ABOVE HALL LINKS, favourites in the second and 10th events, respectively.

Racing continues on Saturday, the first of four meets in eight days, ending with the Saturday, August 6, Jamaica Derby and fillies-only Oaks the following afternoon.