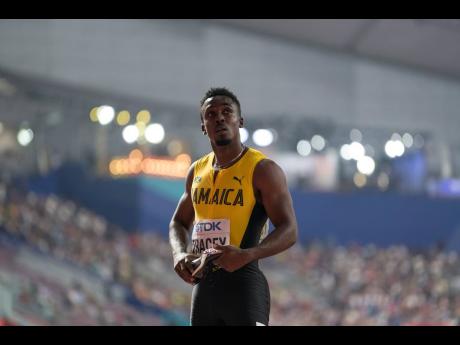 Tyquendo Tracey, the national 100m champion, is ready to speed in Tokyo, when the Olympic track and field competition begins. Now 28, Tracey has the normal motivation that abides in the mind of international athletes, but there is something else...

Tyquendo Tracey, the national 100m champion, is ready to speed in Tokyo, when the Olympic track and field competition begins.

Now 28, Tracey has the normal motivation that abides in the mind of international athletes, but there is something else – a burning desire to erase a bad memory from the 2019 World Athletics Championships in Doha, Qatar.

At the National Senior Championships (Trials), he finished in 10.00 seconds to edge 2011 World Champion Yohan Blake and newcomer Oblique Seville, and he believes his personal best of 9.96s, set in 2018 when he won his first national title, is not far off.

“It’s definitely close by. I think, personally, right now I’ve surpassed it. It’s just to lay it down on the track, so for right now it’s just getting the mental part of the training right and everything should fall into place,” he said.

Tracey missed the 2019 World 100m final by 0.001 to Italian whiz Filippo Tortu, as both men were given the same official time of 10.11 seconds. It still drives him. “That is something that hurt me to date,” he said. “I’m not dwelling on it, but thinking about it. I can still remember how I felt in the moment and the fact that I didn’t really have somebody at the time really protesting it, because I still believe that I should have been in that final based on the photo finish that I saw after the fact, because the photo finish took a long time to be released to the public, weirdly.”

Swept Track Club founder Okeile Stewart, who has coached the former Garvey Maceo High School and University of Technology sprinter this season, said, “It was a bitter moment for him, because it means he could have been in that final, and a Tyquendo Tracey in a finals, as you can see at the National Trials, anything is possible. I don’t think they had him to win at the Trials, [or] had him to do well, based on what I would have heard in the media, as well as in the streets, but, as I said, he’s motivated. He’s very ambitious and he wants to be considered as one of the greats in Jamaica.”

“As I said, I’m still a bit hurt by it, but I’m not dwelling on it,” he shared. “I’m just going to make sure that what happened in Doha won’t happen this time around.”

Armed with a 200m personal best of 20.34s from Trials, where he was third, Tracey says he is ready for Tokyo.