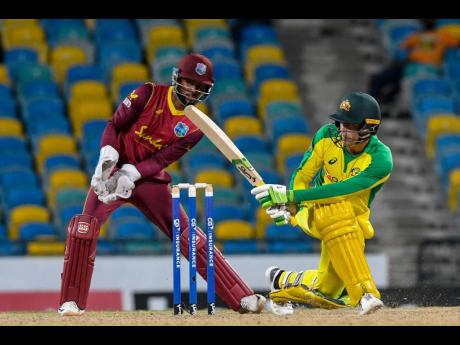 The inconsistency of the West Indies batsmen was once again on show as Australia put in a workmanlike performance with the ball to secure a six-wicket win in the third and final One-Day International at the Kensington Oval, in Bridgetown, Barbados.

Pacer Mitchell Starc continued his good form as he bagged three wickets to help restrict the West Indies to 152 all out in 45 overs and a delivery, after which Matthew Wade scored an unbeaten 51 from 52 balls to guide the Aussies to 153 for four in 30 overs and three deliveries to seal a 2-1 series win.

Evin Lewis contributed to that mark. He returned after going off under concussion protocols, to score an unbeaten 55 from 66 balls with five fours and three sixes.

The rest of the West Indies batsmen struggled while Ashton Agar and Adam Zampa supported Hazelwood and Starc to stifle the Windies innings.

Starc ended with three for 43 while Agar and Zampa bagged two for 31 and two for 29, respectively. Hazelwood ended with two wickets for 18 runs.

With the attainable total, the Aussies were looking to make a meal of the run chase, as they lost three wickets for 65 runs with just 14 overs bowled.

However, captain Alex Carey with 35, Mitchell Marsh 29, and player of the match Agar 19 not out, shared in crucial partnerships with Wade to help the visitors over the line.