Osaka and Djokovic raise profile of tennis at Tokyo Games 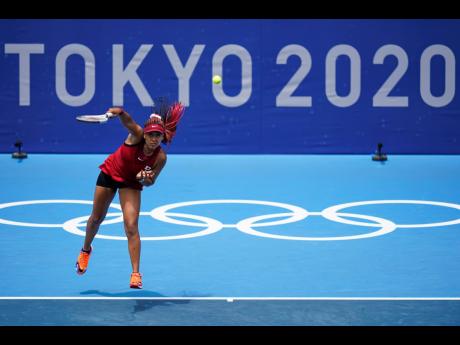 AP
Naomi Osaka, of Japan, serves to Viktorija Golubic, of Switzerland, during the second round of the tennis competition at the 2020 Summer Olympics in Tokyo, Japan on Monday. 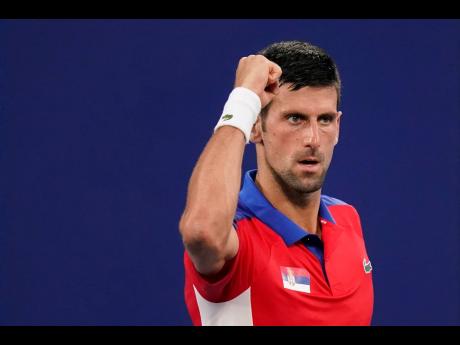 AP
Novak Djokovic, of Serbia, celebrates during a second round tennis match against Jan-Lennard Struff, of Germany, at the 2020 Summer Olympics in Tokyo, Japan on Monday.
1
2

Naomi Osaka has the hopes of the entire host nation resting on her.

Novak Djokovic is attempting to accomplish something that no man has done before in tennis.

Both players are after something special at the Tokyo Olympics and both produced convincing victories on Monday to reach the last 16 at Ariake Tennis Park.

Osaka crushed winners off both wings – forehand and backhand – seemingly at will in a 6-3, 6-2 victory over 49th-ranked Viktorija Golubic of Switzerland. Then Djokovic dispatched 48th-ranked Jan-Lennard Struff of Germany 6-4, 6-3.

“There’s a lot of attention towards tennis as a sport in this Olympic Games,” Djokovic said. “We are grateful, because we are representing our country, ourselves, but also our sport in the Olympic Village.”

Despite this being her first tournament back from a two-month mental health break, Osaka’s strong start is hardly a surprise considering that the Olympic tournament is being played on hard courts – the surface on which she has won all four of her Grand Slam titles.

It was similar to the way Osaka overwhelmed Zheng Saisai of China a day earlier and it extended her momentum after carrying out the ultimate honour at the Games’ opening ceremony by lighting the Olympic cauldron.

The Japanese superstar, who grew up in the United States, was asked in March to handle the flame honours but said she “didn’t feel pressure” about the assignment.

“I felt more excitement,” Osaka said. “It was like a sense of duty, like something I wanted to accomplish.

“It’s something that you see as a kid on TV. You gather around the TV with your family at the Olympics and you watch the whole ceremony,” Osaka added. “I know my grandparents were probably crying and my mom of course.”

If Djokovic can win four more matches, he’ll not only have won his first Olympic title, he’ll also be four-fifths of the way to a Golden Slam – victories in all four Grand Slam tournaments and Olympic gold in the same calendar year.

The Serb already won the Australian and French Opens as well as Wimbledon this year. Now he needs the Tokyo title and the US Open trophy to complete the unique collection.

Steffi Graf was the only tennis player to achieve the Golden Slam in 1988.

“I’m obviously very pumped and inspired to make history,” Djokovic said. “I have that guiding star that is there and I see it and it gives me light and it gives me energy but at the same time I better stick to the stuff that I know works well on a daily basis for me.”

Djokovic’s next opponent will be 16th-seeded Alejandro Davidovich Fokina of Spain, who defeated John Millman of Australia 6-4, 6-7 (4), 6-3.

This is Osaka’s first event since she withdrew from the French Open in May, revealing that she has dealt with depression. She then sat out Wimbledon.

Two more wins and Osaka will be in line for more honours in her Olympic debut – a medal.