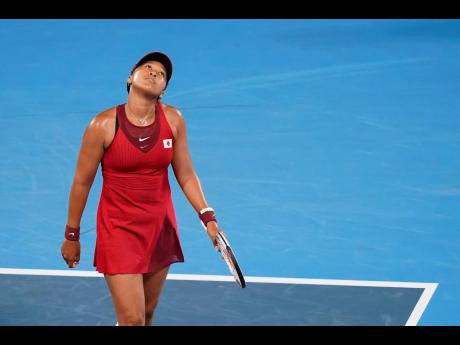 AP
Naomi Osaka, of Japan, reacts during a third round women’s tennis match against Marketa Vondrousova, of the Czech Republic, at the 2020 Summer Olympics in Tokyo, Japan on Tuesday. 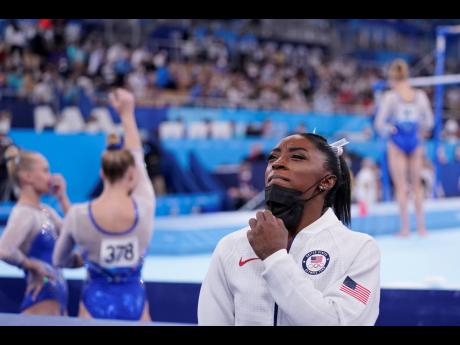 AP
Simone Biles, of the United States, stands holding her mask after she exited the team final with apparent injury, at the 2020 Summer Olympics in Tokyo, Japan on Tuesday.
1
2

Simone Biles came into the Olympics as perhaps the biggest star of the Games. Naomi Osaka was such a big headline act that she was given the honour to light the Olympic flame in her native country.

In a matter of just hours on Tuesday, Osaka was knocked out early from the Olympic tennis tournament and Biles pulled out of the gymnastics team competition when she realised following a shaky vault she wasn’t in the right headspace to compete.

“I didn’t want to go into any of the other events second-guessing myself,” Biles said. “So I thought it would be better if I took a step back and let these girls go out there and do their job.”

Biles is scheduled to defend her Olympic title in the all-around final tomorrow. She also qualified for all four event finals later in the Games. Whether she will get that opportunity remains to be seen.

The team representing the Russia Olympic Committee surged past the short-handed United States of America (USA) to the top of the podium, posting a score of 169.258 to win the country’s first Olympic team gold in nearly 30 years.

The Americans hung on for silver and Great Britain won bronze.

Osaka, who was born in Japan and grew up in the USA, struggled with her usually reliable groundstrokes and lost 6-1, 6-4 in the third round to former French Open finalist Marketa Vondrousova of the Czech Republic.

“I definitely feel like there was a lot of pressure for this,” Osaka said. “I think it’s maybe because I haven’t played in the Olympics before and for the first year (it) was a bit much. I think I’m glad with how I played, with taking that break that I had.”