… Dols looks to use Olympic experience to fuel development 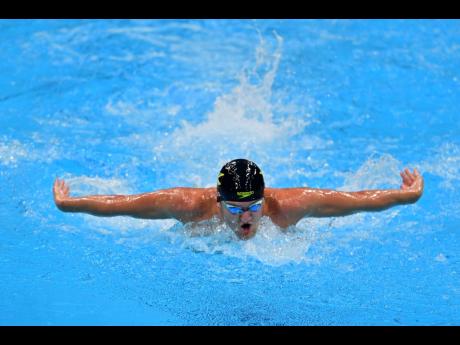 Gladstone Taylor
Jamaica’s Keanan Dols competing in the Men’s 200m Individual Medley during the Tokyo 2020 Olympics at the Tokyo Aquatics Centre in Tokyo, Japan, on Wednesday.

TOKYO, Japan: With his first Olympic Games experience now firmly under his trunks, Jamaican swimmer Keanan Dols says he is inspired more than ever to continue his development and is hoping to follow in the footsteps of one of his biggest role...

With his first Olympic Games experience now firmly under his trunks, Jamaican swimmer Keanan Dols says he is inspired more than ever to continue his development and is hoping to follow in the footsteps of one of his biggest role models: Alia Atkinson.

Atkinson, the iconic Jamaican swimmer, competed in her fifth Olympic Games when she featured in the women’s 100m Breaststroke at the Tokyo 2020 Olympic Games, failing to advance to the next round.

The multiple World Championships gold medal winner and world record holder in the short course 100m and 50m Breaststroke event, announced afterwards that this would be her last Olympic Games, while hinting that this season might also be her last as a competitive swimmer.

Dols followed up Monday’s third-place finish in the Men’s 200m Butterfly heats by completing the Men’s 200m Individual Medley in third place at the Tokyo Aquatics Centre on Wednesday, clocking 2:04.29 to finish behind Panama’s Tyler Christianson, 2:02.70, and Lebanon’s Mark Kabbara, 2:03.08.

“It was a great experience, and I am really excited about the upcoming 12 or so months that I have,” said Dols in reference to commitments with his University of Pennsylvania team and the Commonwealth Games in Birmingham, England, next Summer.

“I felt good. I felt like the entry was pretty good. I don’t know if that’s the fastest I have ever been but felt smooth, had a good turn. The backstroke felt a little iffy, breaststroke felt pretty good, and the freestyle felt okay,” Dols added.

The 23-year-old says his immediate target is to become the fastest in his events in the region and develop into a consistent qualifier and performer at major international events.

In awe of commitment

Dols, who spent some time with Atkinson here in Tokyo, says he is in awe of her commitment and impact and hopes that he will be able to help keep Jamaica’s swimming relevant on the international scene.

“Whenever she retires, she will leave behind some really big shoes to be filled, having gone to five Olympics, being the world record holder, and being the world champion. I couldn’t even dream of reaching the levels she has,” Dols said. “I don’t think I will have the type of career she has had, but I am excited to represent Jamaica and hopefully, bring some Olympics with me so that we have good participation at the Olympics and the Commonwealth Games.

“She’s a true professional, and she has shown what it takes to be successful from the Caribbean region. She has been a role model for me over the years, and she has inspired many persons not just from Jamaica and the region. She is just an incredible human being, a representative for black swimmers from everywhere in the world and showing everyone what is possible,” added Dols.