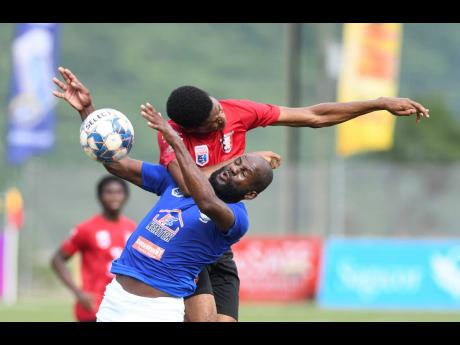 Ricardo Makyn
Mount Pleasant Football Academy’s Francois Swaby (blue top) and Earl Simpson of Arnett Gardens get involved in an aerial battle during their Jamaica Premier League football match at the UWI/Captain Horace Burrell Centre of Excellence on Sunday, July 25, 2021. Due to the newly instituted curfew, Sunday matches in the JPL will be played in the morning.

On Monday last, Prime Minister Andrew Holness announced tighter curfew hours in response to a surge in daily COVID-19 cases, which has seen a return to triple-digit daily increases. The measures which came into effect on Tuesday will see curfew begin at 8 p.m. from Monday to Saturday and at 3 p.m. on Sundays and public holidays. These will last until August 10.

The enactment of the measures could see possible changes to the JPL schedule for the next two weeks, especially for Sunday and Monday’s fixtures as Emancipation Day, which falls on a Sunday, will be officially celebrated on Monday.

Cunningham, in a press conference yesterday, said that for now the Sunday afternoon double-headers will be moved up to the mornings, which had been originally planned before the curfew measures were relaxed late June.

“As of right now, the games have simply been moved early to what was originally proposed when the curfew was at a similar time, which would be the 8:30 a.m. kick-off and 11 a.m. for the two games on Sunday,” Cunningham said. “We are still working with the Jamaica Football Federation on how best it could possibly work if we could move the days in the week or something like that. But right now we are working with what they had already outlined.”

The changes would affect Dunbeholden, Vere United, Tivoli Gardens and Cavalier, who all play on Sunday, as well as Waterhouse and Arnett Gardens, who are scheduled to play on the public holiday (August 2).

While the following week’s fixtures will see some continuity on Saturday, August 7 and Monday, August 9 with the afternoon kick-offs, Cunningham says they are still trying to see how best to address the Sunday slate.

“The other games, we don’t have a challenge in terms of executing those games at the regular times 1 p.m. and 3:30 p.m. The challenge is really on Sunday, at which point we have the games early in the day,” Cunningham said.

Dunbeholden’s manager, Paul Christie, said that while a change to the Sunday morning kick-offs presents challenges in the team’s preparations, operating within the guidelines of the league’s approval has to be paramount.

“We want to have the games played in whatever way possible. We can’t be here asking the Government for the green light and now when you have the green light (you ignore) the national interest,” Christie said. “We take comfort in the fact that we will be playing against an opponent who most likely will face having the same issues as well.”

Christie disclosed that the option of having a single game on Sunday and a double-header on Monday was considered to compensate for the effects of the new two-week curfew times. Christie says that with the immediate concern being this upcoming holiday weekend, a compromise has to be made to operate within the restrictions.