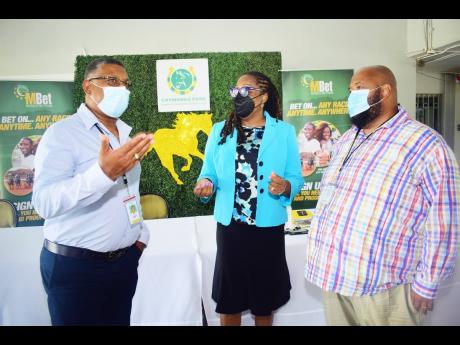 OVER TWO million dollars has been added to the undercard purses for next month’s Jamaica Derby and Jamaica Oaks, which are scheduled to be run at Caymanas Park on August 7.

“We had best-laid plans, but we had to battle the whole COVID restrictions, and when we put things through the spreadsheet, that is what we came up with,” said Solomon Sharpe, executive chairman, Supreme Ventures Racing and Entertainment Limited (SVREL), at a press conference at Caymanas Park yesterday.

Sharpe added: “We would have loved to have done more, but that Friday-Saturday would have given us a better push for the weekend, but we just had to do what is best for everyone.”

The Jamaica Derby, which will be contested over 12 furlongs, is for three-year-old fillies, colts, and geldings and will carry a purse of $7.5 million.

The Jamaica Oaks, which will be contested by fillies only over 10 furlongs, will carry purse money of $3.75 million.

Both races were scheduled for Friday, August 6, and Saturday, August 7, respectively, but Government’s tightening of COVID restrictions that were recently enhanced with adjusted curfew times have forced SVREL to now schedule both races for August 7.

“The response from the horsemen has been fantastic. We have had a steady stream of 100 runners for every race meet. and that is what the punters like. The punters like when they get 10.1 to 11 starters every Saturday,” Sharpe remarked.

He pointed out that the Jamaica Derby and the Jamaica Oaks are shaping up to be exciting contests as all the horses have been working excellently.

“I think that it is going to be two fantastic races, and I am also expecting a great undercard,” Sharpe said.

“To all our fans throughout the length and breadth of Jamaica and all our fans globally, we wanted to make sure that we didn’t interrupt your schedule and run the Oaks on Monday, and that is why we wanted to do it on Independence Day - to make it special. But it is going to be special nonetheless on Derby Day,” he said.

Meanwhile, 13-runners have been declared for the inaugural running of the Betting Gaming and Lotteries Commission (BGLC)/Thoroughbred Owners and Breeders’ Association (TOBA) Juvenile dash over three furlongs to be run next Tuesday.