Newnham looking for a winning mentality from Jamaica Juniors at CAJGC 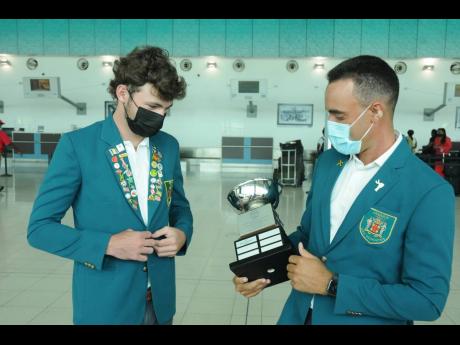 Contributed
Jamaica’s junior golf coach, Jonathan Newnham (right), looks at the James Moss Solomon Trophy with Rocco Lopez, before the team departed for the Caribbean Amateur Junior Golf Championships, to be held in the Dominican Republic.

JAMAICA’S HEAD coach, Jonathan Newnham, is hoping that his team can find that extra gear and come up with the goods to crown themselves champions at the end of the 54-hole Caribbean Amateur Junior Golf Championships (CAJGC), which tees off tomorrow in Punta Cana, Dominican Republic.

The Jamaicans, who were runners up in 2018 and 2019 in the team competition, will be banking on some of their young-but-seasoned campaigners like Rocco Lopez and captain Emily Mayne to get the better of two-time defending champions Puerto Rico.

Newnham, who represented Jamaica from the junior level right up to the senior level for many years, believes the 13-member team can give a good account of themselves, as the team had an extra year to prepare following the cancellation of last year’s tournament because of the COVID-19 pandemic.

“The team is well prepared, as we had the best couple of weeks of training. We are looking forward to doing the best we can and ultimately contend every day to take home the trophy at the end of the tournament,” said Newnham.

The Punta Blanca Golf Course will be new territory for the team. However, Newnham says he has researched the course and the players should do well, as the conditions are similar to courses in Jamaica such as Half Moon, Tryall and Cinnamon Hill, where the team has had numerous practice sessions.

“We are going there to win. Obviously, we can’t control that, but we are going to do the best we can each day to take home the trophy,” added Newnham.

In the meantime, Lopez, who will be leading the charge in the Boys 18 and under category, says he is ready to claim the James Moss Solomon Trophy for the Champion Boy and emulate former teammate and current national champion, Justin Burrowes, who won the trophy back in 2019.

“Being the youngest in the category, I am going out there to do my best. I have been playing with a lot of confidence, which makes the game easier, and once I can stay in it mentally, I like my chances and I am ready to play,” said Lopez.

The 34th CAJGC, which will feature a bubble-style tournament, will see nine Caribbean countries vying for top honours over three days in the Boys and Girls Under-18, Under-15 and Under-13 categories.