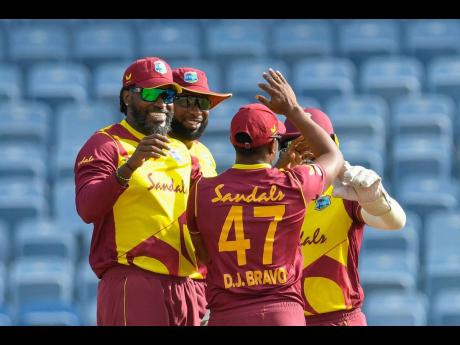 CWI Media photo
West Indies players celebrate the fall of a wicket during a recent T20 match against Australia.

After the no-result in the opening contest because of inclement weather, the West Indies and Pakistan will hope to complete their T20 fixture when the sides meet in the second game of the series in Providence Guyana, starting today at 10 am Jamaica time.

With some showers also predicted for this fixture, the sides will be keeping their fingers crossed that they can get in more than the nine overs the West Indies faced in the opening encounter in Barbados.

Both teams will be looking to showcase their talent, with the West Indies eager to prove that they can bat better than the 85 for five they showed at the Kensington Oval, while the Pakistanis will be keen to unleash their bowlers once again after they had a good start in the opening fixture.

The Providence pitch at the National Stadium is set to host just its second T20 international outside of the world tournament in 2010, and, by all indications, a good all-round cricket wicket will be prepared to provide for an entertaining contest in front of 40 per cent of the stadium’s capacity. Only fully vaccinated fans are expected to attend the game.

With the series now virtually a three-match contest, a win for either side in today’s encounter will give the team the upper hand, with the West Indies hoping they can turn around their fortunes against the tourists who have won four out of the five previous T20 series.

The hosts will be sweating over the availability of opener Lendl Simmons, who had to retire hurt in the opening fixture after he was struck on the neck by a rising delivery from debutant pacer Mohammad Wasim Jr.

If Simmons is unable to play, Andre Fletcher could be asked to step in to open the batting with Evin Lewis. Local hero Shimron Hetmyer will also be hoping that he can get a chance to shine, after making just five in the opening fixture.

The Pakistanis are not expected to make any changes to their line-up. However, they will be hoping that Hasan Ali and company can hit their straps once again.