Arnett in need of talisman – Thomas 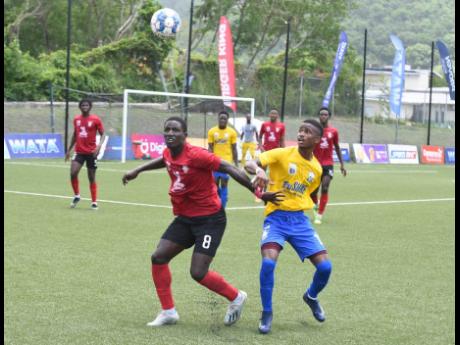 FOLLOWING HIS team’s 1-1 draw against Molynes United in the Jamaica Premier League (JPL) football competition yesterday at The University of the West Indies (UWI)/Jamaica Football federation (JFF) Captain Horace Burrell Centre of Excellence, Arnett Gardens head coach, Alex Thomas, said his team continues to suffer from not having a reliable frontman to score their goals.

The ‘Junglists’ have only scored a mere three goals from their five matches this season, with seven conceded, and Thomas insists that being short in numbers and inexperience up front have seriously impacted the South St Andrew club’s attacking prowess.

However, with no transfer available until next season, Thomas said he will continue to push the players to get the best out of them.

In the meantime, one player he believes has to potential to get goals consistently is forward Ronaldo Cephas, who scored a goal in their 2-1 victory against Humble Lion.

“We are definitely short in that (scoring) department. We are trying to put some responsibility on Cephas because we see that he is one that is capable of carrying that load. He is young but we have to keep pushing him. Hopefully, he can be the one to hit that form,” said Thomas.

He added: “He has come of age and has not done badly, but he has to try and score week in, week out. If he does not score, try to assist.”

Thomas also noted that other JPL clubs have senior player in their ranks to help guide the young players.

“That senior person, the other teams have it. Before the League started we had Paul Wilson, Kemal Malcolm and Fabian Reid. Reid and Malcolm scored over 20 goals for us last season and that is a big loss. Paul Wilson created many chances and score almost 10 goals.

“These players here now are short in numbers. We are working with players who are playing (Premier League) for the first time. So we are short in that area, but we have to push them to the limit and try to find a player to step forward and bring that goalscoring ability. So it is more the mental aspect that I am trying to get across to these players, to think on the next level,” he added.

Arnett led through an Ackeem Stewart’s own goal after 20 minutes. However, Nicholas Nelson equalised with the 68th minute for Molynes.

Molynes United FC’s assistant coach, Andre Daley, thought his team was the better over the contest. But like Thomas, he believed his players were also wasteful.

“To some extent I am pleased but not 100 per cent. We gave some instructions which they carried out well,” he said. “But we squandered a number of opportunities and that is what cost us the game.”