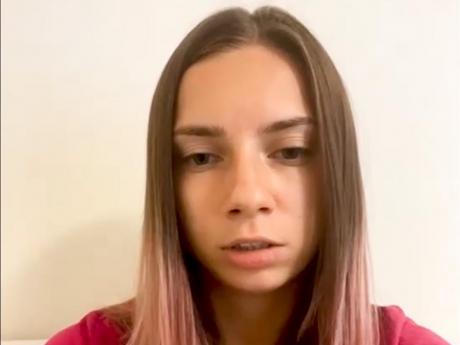 In this photo taken from video, Belarus Olympic sprinter Krystsina Tsimanouskaya speaks during a video interview with the Associated Press in Japan, Tuesday, August 3, 2021. Belarus sprinter told AP in a video interview she hopes to continue her career, but for now, safety remains a priority. (AP Photo/Daniel Kozin)

MOSCOW (AP) — A Belarusian Olympic sprinter who had a public feud with officials from her team at the Tokyo Games said Tuesday that authorities “made it clear” she would face punishment if she returned home to an autocratic government that has relentlessly stifled any criticism.

Waiting to leave Japan to seek refuge in Europe, Krystsina Tsimanouskaya said she hopes she can continue her career, but for now, her safety is the priority.

After she criticised the management of her team on social media, she accused officials of hustling her to the airport and trying to put her on a plane back to Belarus.

In the dramatic standoff, several countries offered help, and Poland granted her a humanitarian visa Monday.

She plans to fly to Warsaw later in the week.

Team officials “made it clear that, upon return home, I would definitely face some form of punishment,” the 24-year-old sprinter told The Associated Press in a video call interview from Tokyo.

“There were also thinly disguised hints that more would await me.”

She added that she believed she would be kicked off the national team.

She hopes to be able to continue running once she has reached safety.

“I would very much like to continue my sporting career because I'm just 24, and I had plans for two more Olympics at least,” she said.

But “for now, the only thing that concerns me is my safety.”

Asked what made her fear she would be in danger at home, Tsimanouskaya said that “the key phrase was that 'we didn't make the decision for you to go home, it was decided by other people, and we were merely ordered to make it happen.'”

Reached by phone Tuesday, Dzmitry Dauhalionak, the head of Belarus' delegation at the Games, declined to comment, saying that he has “no words.”

In the interview, Tsimanouskaya also expressed worry for her parents, who remain in Belarus.

Her husband, Arseni Zdanevich, told the AP that he decided to leave the country when Tsimanouskaya told him she wasn't coming back.

“It was all very sudden. I only had an hour to collect my things,” Zdanevich said from Ukraine, where he said he feels safe even though police are investigating whether a Belarus activist's death there was murder.

He hopes to join his wife in Poland.