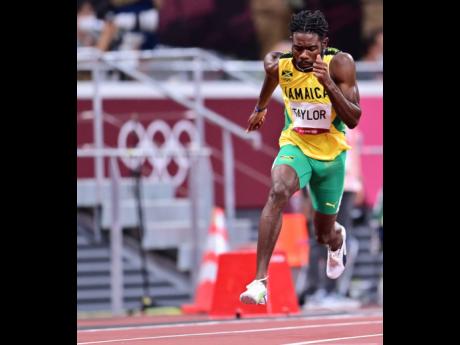 Gladstone Taylor
Jamaica’s Christopher Taylor competes in the men’s 400 metres semi-finals at the Tokyo 2020 Olympics Games at the Tokyo Olympic Stadium in Tokyo, Japan, yesterday. Taylor clocked 44.92 seconds to qualify for the final.

“I have won, no matter what happens, I have won. I have achieved my goal of making it to the Olympic final and no one can take that away from me.”

Not many would disagree with Christopher Taylor.

Competing at his first major senior international championships for Jamaica, it was the Tokyo 2020 Olympic stage that provided the platform for the former youth prodigy to demonstrate his growth over the past few years, as he booked a spot in the men’s 400 metres final, this after a second-place finish behind American Michael Cherry secured his lane in the 9:00 p.m. (7:00 a.m. Jamaica time) medal round.

The Jamaican clocked a season best 44.92 seconds, with Cherry crossing the line in 44.44.

Taylor, who revealed a hellish road to Tokyo that involved him fainting before and after the final at the National Senior Trials in Kingston in June and having to deal with many setbacks before then, said it was the warrior within that kept him pushing towards his ambition of representing the island at the Olympic Games.

“I don’t know where to start. I’ve been training for this all season, started my preparation from last year and entered this season very focused and determined,” said Taylor, a World Youth champion and World Juniors silver medal winner in the 400m.

“I had a lot of ups and downs, before Trials and after Trials and for me to come out here and represent my country in this manner is an amazing feeling. I was determined to push and do my best. I knew I had to come here and give it my all to ensure I advanced to the final.

“I just wanted to make sure I was in the final. I have achieved that through hard work and dedication and I am proud about that,” added Taylor.

Taylor certainly gave his all on the track and had to be wheeled off after developing breathing issues. He was quickly back on his feet and says he is looking to push himself in the final, but will not get caught up in a time or results, but is instead focused on making the most of the opportunity.

“At this moment there is nothing more left to accomplish. My goal was to make the Olympic final and I made it, so it doesn’t matter. Even if I go our there and end up running 47 seconds, I am still going to take a victory lap regardless,” said Taylor.

“I don’t know what will happen, I may not win the final but I have achieved my goal for the year, so I won, personally I won, no one can take that from me,” he added.

The other Jamaican, Demish Gaye, missed out on a spot in the final after finishing fourth in his semi-final in a time of 45.09.