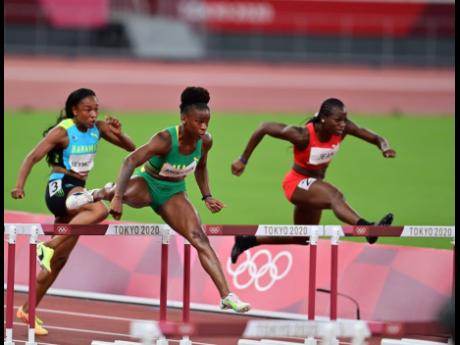 Women’s 100m hurdles finalist, Britany Anderson, may not have won the Olympic medal she had hoped for at the Tokyo 2020 Games.

However, her experience at the championships delivered a place in the final and an impressive new personal best time, things she is quite grateful for and intends to use as a motivating tool for the remainder of the season and next year’s push to the World Championships in Eugene, Oregon.

Anderson, 20, competing in her first senior international championships for Jamaica, had some trouble in the sprint hurdles final on Monday (Sunday night Jamaica time), finishing eighth in 13.24 seconds.

The event was won by Puerto Rican Jasmine Camacho-Quinn in 12.37 seconds, with the silver going to American Kendra Harrison, 12.57, and Jamaican Megan Tapper, winning the bronze in 12.55 seconds.

Earlier in the semi-final stage, Anderson improved her personal best to 12.40 seconds on her way to a win. That time makes her the second fastest woman in the world this year.

Anderson, who won the World Under-18 title four years ago in Nairobi, Kenya, and was controversially awarded the silver medal – and not gold – at the World Under-20 Championships in Tampere, Finland, in 2018, is certain that the experience competing at the Olympic Games will serve her well in the future.

“Well now I know where I’m at. I know what I can do. All I need to do is just get the first hurdle, the first three hurdles out the race and keep it tight after that,” said Anderson, who outlined the challenges she had in the final.

“The first hurdle wasn’t good, I tried to get back in the race but I hit hurdle seven or eight, or both of them, and it just wasn’t there after that,” said Anderson. “The momentum wasn’t there, everything just fell apart after that.”

Danielle Williams, who has a personal best of 12.32 seconds, is the only Jamaican to have gone faster than Anderson in history, and in a mark of encouragement to her countrywoman, Tapper outlined that Anderson’s future was a bright one and implored Jamaicans to support her continued development.

“Listen, Britany is good. Britany is young, she’s just 20 years old and she made an Olympic final on her first first try and ran 12.40 in the semi-finals. She’s so good right now. Jamaica, you have a star on your hands,” said Tapper.