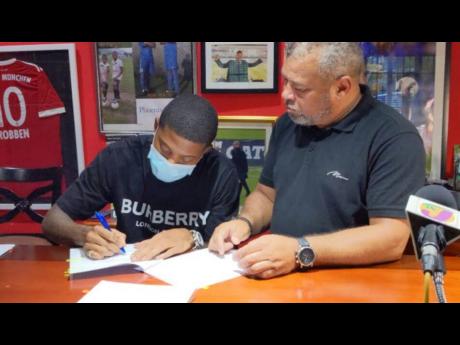 Contributed
Reggae Boy Leon Bailey (left) made his move to the English Premier League official when he signed a contract with Aston Villa Football Club yesterday. The signing took place at the Phoenix All Stars Academy headquarters in Kingston. Looking on is his adoptive father and agent Craig Butler.

National winger Leon Bailey says he is appreciative of the growth he achieved as a player at former German club Bayer Leverkusen, as he begins the next chapter of his career, in the English Premier League.

Bailey officially became an Aston Villa player, signing his reported five-year deal with the club at a press conference held yesterday at the headquarters of the Phoenix All Stars Academy in Kingston with his agent and adoptive father Craig Butler at his side.

As he closed the book on his time at Leverkusen, Bailey credited the club for helping him to evolve as a player.

“I always want to learn and over the last five years at Leverkusen, I’ve gained so much experience and I think the club helped me a lot in terms of becoming a better person, a better man, a more mature player,” Bailey said. “I think it went well at the club. I gave everything at all times when I was wearing their jersey and that will always be home for me. And no matter what, I’ll never forget them because they have done a lot for me and my career.”

Bailey is coming off his best season in Germany statistically, having scored 15 goals and registering 11 assists in all competitions last season. Nine of those goals came in the Bundesliga, matching his 2017-18 season high. However, he also had nine league assists, the most that he has had since joining the club in 2016. During his stay, he helped Leverkusen reach the final of the 2020 German Cup. Bailey said that he is excited to continue his growth in England.

“I’m really looking forward to taking what I have learnt and bringing it to the Premier League and hopefully gain more there and reach to a higher level. That’s the focus,” Bailey said.

It is that focus which he hopes will lead to success with Aston Villa who finished 11th last season. Bailey made his intentions clear as he is determined to help the club qualify for European competition in the immediate future.