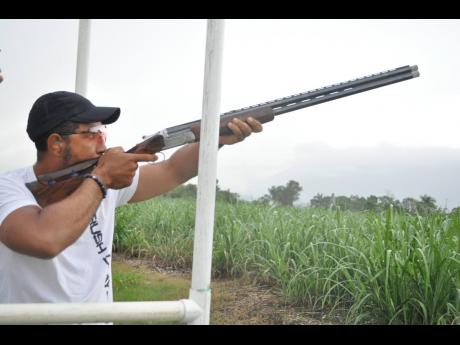 Contributed
Top gunner, Shaun Barnes, takes aim at a target at the 200 Summer Open Sporting Clays at the Worthy Park Estate in St Catherine at the weekend.

Shaun Barnes and Aliana McMaster are champions of the Jamaica Skeet Club’s (JSC) first tournament of the year. It took place at the Worthy Park Estate in St Catherine at the weekend.

The conditions which ranged from extreme heat to heavy rains were challenging for the shooters who faced 17 stations so spread out across the course, they had to drive to get to them.

Top gunners Barnes and Christian Sasso, who both represented Jamaica at the Pan American Games in 2019, were in fine form, scoring 92 and 91, respectively, on day one, and came back on the second day to post identical scores of 86 each. They were the only shooters to post scores above 90 during the tournament.

At the end of the two day days of stiff competition, Barnes was declared the highest overall (HOA) winner with a combined score of 178 while Sasso was the runner-up on 177.

“I thought it was very entertaining course and as a result, I am very happy and pleased with my performance and look forward to shooting courses of similar nature in the near future,” he said. “Because of COVID-19 protocols all the shooters weren’t allowed to shoot at the same time so we had to be separated and shot at different times, so I shot at 9 a.m. on Saturday, which was very hot. The sun was out blazing. The advantage was that we could see the targets a lot better but the conditions were the total opposite on Sunday.

Barnes said that the rainfall made the targets difficult to see.

“Things like your glasses fogging up or with the water beating down your glasses made it even more challenging,” he said. “Overall, it tested your ability to focus and played a lot on your mind and tested your mental game. So with all the conditions that we faced, I am even more pleased that my score was good enough to take home the HOA trophy.”

She agreed with Barnes about the disadvantage created by the weather.

“The rain affects you so much regarding the lighting, the background, the environment. It changes and it can be distracting,” she said. I am truly grateful to come out with such strong scores for this shoot and with the support and guidance of my squad I had a good time over the weekend.”

The top three in each class