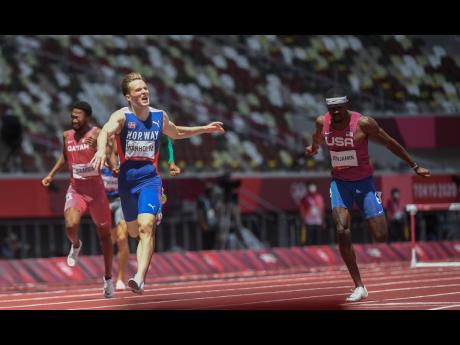 When brash Norwegian hurdler Karsten Warholm led the field to the starting line on a steamy afternoon at Olympic Stadium, he and his seven opponents had every reason to expect they’d be part of something special.

It turned out to be more than that.

This gathering of the world’s best 400m hurdlers, yesterday, produced a gold medal for Warholm, a world record, a masterpiece and slice of history. It also might have been one of the best races ever run.

“I never thought in my wildest imagination that this would be possible,” Warholm said after smashing his own world record in a time of 45.94 seconds.

In deciding where the race stands in the annals of Olympic history, there is a lot to consider:

— The man who finished behind Warholm, Rai Benjamin, ran more than half a second faster than any other hurdler in history: 46.17s. Had anyone dared tell him he would run that fast and finish second, Benjamin said, “I would probably beat you up and tell you to get out of my room.”

— The third-place finisher, Alison dos Santos of Brazil, finished in 46.72s, which would’ve been a world record five weeks earlier.

— The man who finished seventh in the eight-man field, Rasmus Magi of Estonia, was barely in the frame of photos taken from behind the finish line. But he was one of six to set either a world, continental or national record.

Warholm’s pull-away win in front of an empty stadium — someday, thousands might brag they were there — eclipsed his month-old world record by .76s.

Hard to believe, even for the athletes watching it unfold in front of them.

“After the second hurdle. I was like, s***. If you go after them, it’s suicidal,” said Kyron McMaster, the fourth-place finisher whose time of 47.08s would’ve won the last six Olympics.

On July 1, Warholm brought it down to 46.70s, which felt like either a brazen rejoinder to Benjamin, or a sign of things to come.

Only a week before that, at US Olympic trials, Benjamin had run 46.83s to become the fourth man to crack 47s. After the run, he announced that he felt he had a “low 46” in him somewhere, maybe in Tokyo.

That back-and-forth set the stage for yesterday, and a showdown between rivals who have brought this event to a pinnacle not seen since the 1980s.