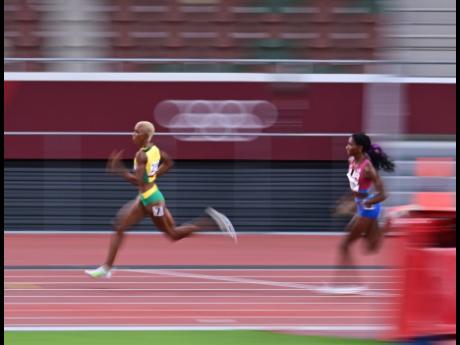 Gladstone Taylor
Jamaica's Candice McLeod (left) just ahead of the USA's Quanera Hayes in the Women's 400m semi-finals at the 2020 Olympics Games in Tokyo, Japan on Wednesday.

Olympic debutant Candice McLeod and her Jamaica teammate Stephenie Ann McPherson have booked their spots in the final of the Women's 400m event at the Olympic Games in Tokyo, Japan on Wednesday.

McLeod clocked a personal best (PB) 49.51s for second in her semi-final, behind Marileidy Paulino, who set a Dominican Republic national record of 49.38s.

Cuba's Roxana Gomez was third in a PB of 49.71s and took a fastest loser spot.

The USA's Quanera Hayes took the other fastest loser spot, from the same semi-final, finishing fourth in 49.81s.

McPherson also clocked a PB to win her semi-final. She finished ahead of former Olympic champion Allyson Felix in 49.34s. Felix qualified in a season's best 49.89s.

The Bahamas' Shaunae Miller-Uibo won the second semi-final in 49.60s, ahead of Great Britain's Jodie Williams, who clocked a PB 49.97s for second.