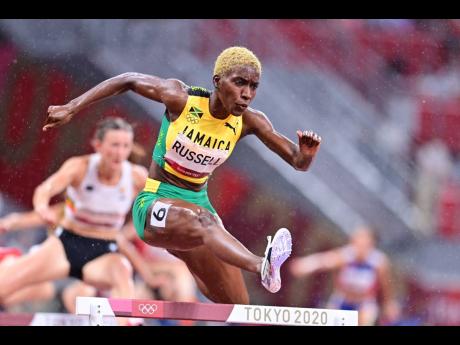 Gladstone Taylor
Janieve Russell in action in the 400m hurdles semi-finals at the Tokyo 2020 Olympic Games in Tokyo, Japan on Monday.

TOKYO, Japan: She did not win a medal in the Women’s 400m Hurdles at the Tokyo 2020 Olympic Games, but national champion Janieve Russell had more than enough reason to celebrate at the Tokyo Olympic Stadium following the final after posting a big...

She did not win a medal in the Women’s 400m Hurdles at the Tokyo 2020 Olympic Games, but national champion Janieve Russell had more than enough reason to celebrate at the Tokyo Olympic Stadium following the final after posting a big personal best in her fourth-place run.

Russell became the fourth-fastest Jamaican in the event with a 53.08 seconds clocking, pulled along by the world-record run of American Sydney McLaughlin, who crossed the line in 51.46s, lowering her own old mark of 51.90s, which was set just over a month ago at the US Trials.

The Jamaican’s old personal best was 53.46s, which was set in 2018 in Lausanne, Switzerland.

“I know it was a really, really good race. I knew it would be a world-record race,” Russell told The Gleaner. “I didn’t expect it to be that fast because I predicted 51.7s, but I’m just really glad I’m a part of history.

“Personally, I just wanted to go there, listen to the script, keep my composure, because I knew it was going to be a hard race. I know that people expect a lot, but my expectation matters the most, and I was really happy to come out with a personal best,” added Russell, who shared her thought process in the build-up to and throughout the race.

“I just kept on talking to myself, recapping previous years when I wasn’t focusing on myself, I was focussing on others and the expectation of others. I was just reminding myself that I have nothing to lose, only to gain. I am a two-time Olympian, two-time finalist. I am going up against the best of the best. I am in the final. I deserve to be here, and I just needed to execute.”

Russell’s time takes her behind Melaine Walker, whose personal best is 52.42s, however, prior to this race, she also held the Olympic record, 52.64s; Kaliese Spencer, 52.79s, and Deon Hemmings, 52.82s, as fastest Jamaican.

There was a little disappointment for the 27 year-old, who said she wanted to join the 52-seconds club, but is encouraged by how close she got to that landmark despite an error on the final hurdle.

“I messed up on hurdle 10, and that cost me a lot of seconds that would have been a 52.8, 52.9 (time) for me, so I am just really happy. My season isn’t finished, and I am upbeat because I know I can run the 52 seconds. So I am going to continue to work hard, take some days off, get back on the track and run that 52 seconds,” Russell shared.

With McLaughlin, Muhammad, and now Bol clearly well ahead of the chasing pack in the event, Russell, the reigning Commonwealth Games champion, said she remains confident that her time will come, and she will work her way on to the podium.

“They are all humans. They have the same muscles like us; they have the same blood running through their veins. It just takes hard work and dedication, and I have both of that,” Russell said.

“I just have to be patient with myself and with the programme, and I know I can be at the top, and with four years back-to-back of World Championships and Olympics, I am just determined to be on those teams, and I am determined to get a medal. It’s not over yet,” added Russell.