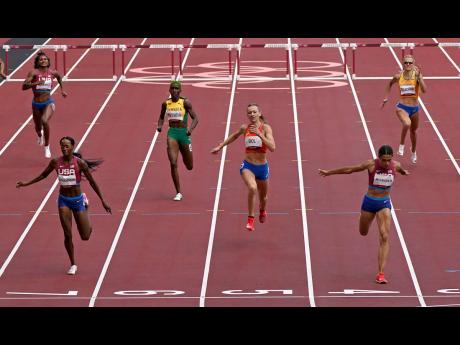 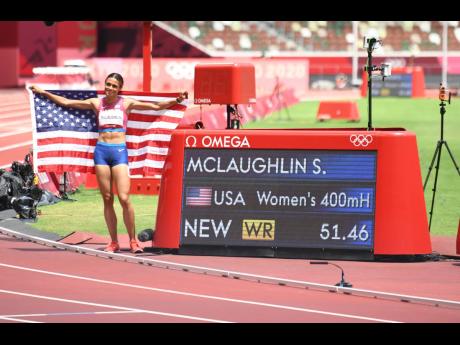 Gladstone Taylor
USA’s Sydney McLaughlin poses by the clock while celebrating her world record run of 51.46 seconds in the Women’s 400m hurdles final at the Olympic Games in Tokyo, Japan yesterday.
1
2

Only one of the world’s best hurdlers could win the Olympic gold medal – and McLaughlin came out ahead in the latest instalment of one of the best rivalries in global athletics.

The 21-year-old from New Jersey won the 400m hurdles title yesterday, finishing in 51.46 seconds in yet another history-making day on the speedy Olympic oval. McLaughlin also broke the Olympic record of 52.62s set by Jamaican Melaine Walker at the Beijing Games in August 2008.

“Iron sharpening iron,” McLaughlin called the latest in her series of showdowns with Muhammad, each one faster than the last. “Every time we step on the track, it’s always something fast.”

McLaughlin came from behind after the last hurdle to top the defending Olympic champion. Muhammad’s time of 51.58s also beat McLaughlin’s old record of 51.9, set at Olympic trials in June. But, in this race, it was only good enough for the silver.

For McLaughlin, it was a muted celebration – in part because traversing 400m while clearing 10 hurdles at 17 miles-per-hour is more exhausting than she makes it look.

“There was some lactic acid building up,” she said.

She sat on the ground, gave a serious look toward the scoreboard – yep, it’s a record ... again – then got up and moved toward the hand-sanitising station. Muhammad came over and gave her a congratulatory hug. They’ll meet again. World championships are next July.

“No mixed emotions,” Muhammad said. “Sure, there are always things you want to do better. But you use this as a springboard to the next. This is not my last race.”

Impressive as McLaughlin’s race was, this record didn’t really surprise anyone.

McLaughlin and Muhammad, a New York City native who went to Southern Cal, have been trading the record, and the wins, for two years. Muhammad first broke the mark at US Nationals in Des Moines, Iowa, in 2019, then lowered it to 52.16s, at the World Athletics Championships in Doha, Qatar later that year.

McLaughlin broke that record earlier this summer at Olympic trials, running 51.90 to become the first woman to crack 52 seconds.

It felt inevitable that the mark would go down again on a fast track in perfect, hot-and-humid running conditions in Tokyo.

It was a lot to live up to for the M&M duo, whose race was even more eagerly anticipated. They exceeded expectations, and left everyone else in the race behind.

“I just went out like crazy for the first 300m to be with them,” said bronze medallist Femke Bol of the Netherlands, who set a European record and whose time of 52.03s would have been a world record six weeks ago. “And I died a bit.”