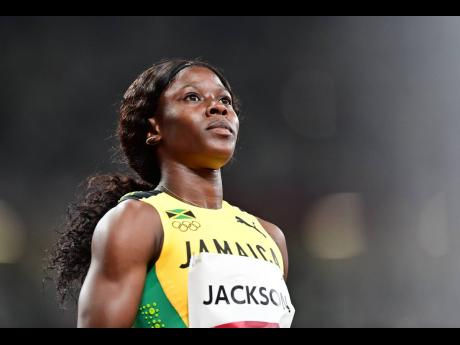 Sprinter Shericka Jackson says that a delay on the television screen at the Tokyo Olympic Stadium in Tokyo, Japan played a role in her not qualifying from the first round of the Women's 200m event.

Jackson placed fourth in a time of 23.26 seconds in heat four on Monday, but her time was not fast enough to advance to the semi-finals. Jackson seemed to be comfortably among the top three automatic qualifiers and slowed down in the latter part of the race.

However, she said that a transmission delay on the screen at the stadium resulted in her not being able to anticipate accurately where the other competitors were, something that she realised when running the anchor leg in the Women's 4x100m relay semi-finals.

"Honestly, I was actually watching the screen in front and I just realised in this 4x100m that it was late, so I guess I misjudged how far they were because I wanted to qualify as easily as possible, knowing that the semi was in the evening," Jackson said after the race.

Jackson was beaten for third by Italian Dalia Kaddari, preventing her from a potential medal double in her first competitive season at both the 100m and 200m. Jackson said that while disappointed, she will be better for the experience.

"It's part of the sport, it's part of life, you come in the championship ready to run and then you lose a little bit of focus. It's a learning process for me. I've definitely learned from this. It was a hard lesson to learn," Jackson said.

With the potential for a gold medal in the 4x100m relay final, Jackson said that she is ready to give her all to secure another medal, and says she has already put her 200m mistake behind her.

"I actually wanted to run the 200m and the 100 and to know that I got a medal in the 100m and I didn't make it to the semis in the 200m, I just have to go back refocus and come back again after the relays and see how fast I can go," Jackson said.

Elaine Thompson Herah and Shelly-Ann Fraser-Pryce are expected to be in the team for the final which begins on Friday at 10:30 p.m. (8:30 a.m. Jamaica time).