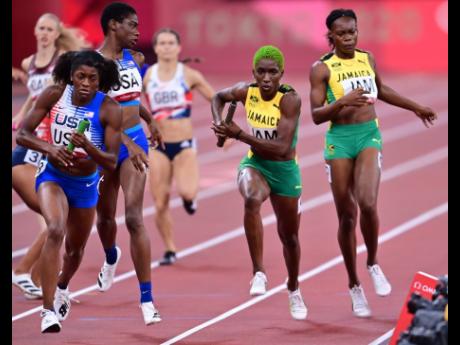 Gladstone Taylor
The USA's Kendall Ellis (left) receives the baton from Wadeline Jonathas (second left), ahead of Jamaica's Roneisha McGregor (right), who hands off to teammate Janieve Russell during the semi-final of the Women's 4x400m relay at the Olympic Games in Tokyo, Japan on Thursday.

The Jamaicans clocked a season's best (SB) time of 3:21.95 minutes to place second, behind the United States' team of Kaylin Whitney, Wadeline Jonathas, Kendall Ellis and Lynna Irby who ran an SB 3:20.86.

The Netherlands, in a national record (NR) 3:24.01, and Canada (SB 3:24.05) were fourth and fifth respectively to take the two fastest loser spots in the final.