James: Olympic experience will do ‘wonders’ for Taylor’s career 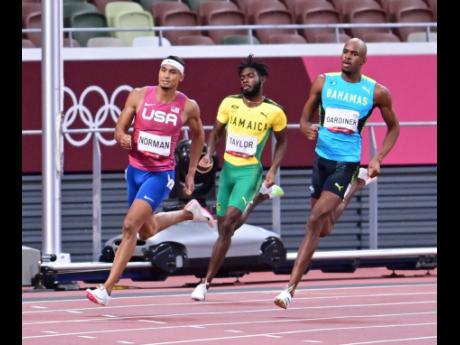 Gladstone Taylor
Jamaica’s Christopher Taylor (centre) runs between The Bahamas’ Steven Gardiner (right) and the United States’ Michael Norman during the men’s 400 metres final at the Tokyo 2020 Olympic Games, at the Tokyo Olympic Stadium in Tokyo, Japan, on Thursday.

Having paid keen attention to his development through the age-group ranks, Grenada’s three-time Olympic medallist, Kirani James, says he expects fellow Tokyo 2020 400 metres finalist, Christopher Taylor, to learn from the experience and continue his development in the event.

“I think this experience is only going to help him really grow,” said James.

Taylor clocked a personal best 44.79 seconds to finish fourth in the 400-metre final inside the Tokyo Olympic Stadium on Thursday, in what was his first global senior championships.

The event was won by The Bahamas’ Steven Gardiner, 43.85 seconds, with Colombia’s Anthony Zambrano, 44.08, taking the silver medal ahead of James, who clocked 44.19 for the bronze.

It was James’ third medal - each of them a different colour - in the 400 metres at the Olympic Games, following his gold at the 2012 Games in London and his silver medal won at the 2016 Rio Olympics.

“Yeah it’s the complete set, like, you know, Thanos collecting all the Infinity Stones, but at the end of the day I’m just grateful and happy,” said James. “I’m grateful to God to just be on this stage and being able to represent and win another medal.”

“I think, you know, it’s just having, you know, having faith, trusting in God and the process, my coach and everything so I’m just happy to be back. It’s been a long journey so I’m just happy,” added James, who has had to battle injuries and illness on his way back to the Olympic podium.

James, who said he had been monitoring Taylor’s progress throughout his junior career, said he was pleased to see him transitioning on the senior stage and believes he will enjoy more success once he applies himself.

“This is my first time competing against him (Taylor). You know, I’ve known about him since he was like 15 or 16 running those incredible times,” said James. “So he’s somebody I’ve always kind of been looking for, you know, to see how his career is progressing and just seeing him here at this stage, I think this experience is going to do him wonders.

“As long as he gets everything in place you stay settled, I think this experience is only going to help him grow,” James added.

Taylor was the first Jamaican man to feature in the 400m final at the Olympic Games since the 2004 Athens Olympics, where Brandon Simpson, Davian Clarke and Michael Blackwood finished fifth, sixth and eighth, respectively.