McLeod aiming for the sky 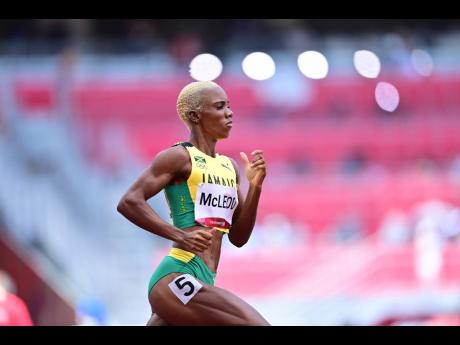 Olympic 400 metres finalist Candice McLeod believes there is much more to come from her, after her fifth-place finish at the Tokyo 2020 Games on Friday inside the Tokyo Olympic Stadium.

McLeod clocked 49.87 seconds to finish behind Bahamas’ Shaunae Miller-Uibo, 48.36, Marileidy Paulino, 49.20, from the Dominican Republic and American Allyson Felix, 49.46. The other Jamaican in the final, Stephenie-Ann McPherson, finished fourth in 49.61 seconds, after reportedly suffering an injury during the event.

“That’s my second best time ever,” McLeod exclaimed. “I totally was not expecting 49 seconds today because of the 49 seconds that I did the other day, but I came out to do my best. It was a quality field with great ladies. So, yes, I was expecting a fast race, but I just kept my own race and went on.”

McLeod had lowered her personal best to 49.51 in the semi-final, which means that she has now run a personal best in six of her last 10 races.

“There is no limit on Candice McLeod. Wherever I’m going next year, wherever it takes me, wherever my coach decides to go, and if my body can manage, I’m going, no limit, I’m just ready to go,” McLeod told The Gleaner.

The 24-year-old University of the West Indies student says she is looking forward to returning to training and continuing her development.

“I’m excited, I am really excited. I mean, the season is not yet finished but I am excited to start training for 2022. I can’t wait to show up every day. To die in training, I’m willing to go into training to die just to see what 2022 has in store for me,” she noted.

McLeod says she was surprised to score another 49 seconds clocking after her big personal best run a couple days earlier and shared that she was focused on sticking to her execution plans despite the expected pace.

“I knew the race was going to be fast, but I wanted to keep my pace because if I had gone too hard, I would not finish because I know my legs. Two 49s within two days, that’s more than what I thought I could have done, so all I wanted to do, as I always do, was to run my own race,” McLeod stated.

McLeod also had some words of encouragement for McPherson, who was emotional after the race.

“I’m not fully sure if she has injury, but I know the emotions, maybe she was expecting better, but hands down to Stephenie-Ann, she’s the most consistent athlete I know, she is very determined and persistent. I always look up to Stephenie-Ann because despite her not going for 49 seconds every year, she kept her pace. I admire her so much and I want her to know that whatever happened, it is not the end, it is just another day. I mean she will move past it and I hope she will come back stronger,” said McLeod.