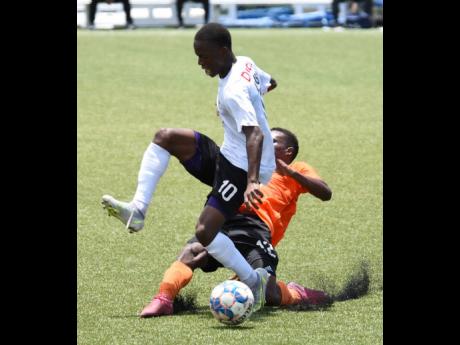 Both Waterhouse and Cavalier expressed concern regarding their form after their 2-2 draw in the Jamaica Premier League (JPL) at the UWI/JFF Captain Horace Burrell Centre of Excellence yesterday.

Dwayne Atkinson netted twice for Cavalier but on both occasions, Damion Binns replied to ensure the Marcel Gayle-coached team walked away with a point.

Cavalier Sporting Director Rudolph Speid admits that it is a worry, and that they need to find ways to close out games, even though they are an attacking side that does not believe in being overly defensive.

“We were good for 80-90 minutes,” Speid said. “We just did not put away our chances and that is what cost us the game. We could have shut it down from we went 2-1 but we decided that we don’t play like that, so we kept on attacking as we thought we could have got the third and the fourth.

“We got other chances that we should have put away and we didn’t and from two set pieces we conceded. But it shows we are good over long periods, we just need to find a way to close it out,” he said.

He said they will try to correct those issues on the training pitch.

Waterhouse have been creating a host of chances each game but have not been clinical enough and have paid the price with their position in the table.

They have three draws and a defeat in their last four matches and assistant coach Damion Gordon said the aim is to get into a play-off spot and take it from there.

But so far they are finding three points hard to come by and Gordon said this is a worry with just a few rounds to go before the play-offs.

“Today was one of the few games we didn’t create at least eight chances,” he said. “But we just have to work on our conversion and put away our chances. When we do that, it’s how we stay compact and defend. But that is something that has been hampering us.”

Atkinson fired Cavalier into the lead with a curling shot in the 34th minute. However, five minutes after the break, Binns pulled Waterhouse level with a deflected free kick.

Atkinson netted his second of the game and his second brace of the competition when he slotted home Ronaldo Webster’s cross in the 59th minute. But Binns converted a 85th- minute penalty for Waterhouse to secure a point.

In the day’s other game, Vere United beat Arnett Gardens 1-0 to move to the top of the table with 14 points.