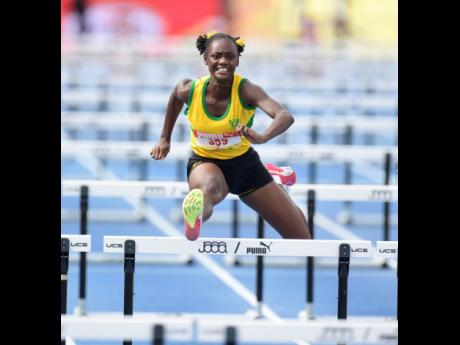 SPRINT HURDLER Ackera Nugent and Ralford Mullings are Jamaica’s leading medal hopefuls on a 41-member team named by the Jamaica Athletics Administrative Association (JAAA) to represent the country at World Athletics Under-20 Championships to be held in Nairobi, Kenya, from August 17-22.

Nugent, who is ranked number one in the women’s 100-metre hurdles on the International Association of Athletics Federations (IAAF) Top List with a time of 12.76 seconds, and who is also ranked number two in the 100 metres with 11.09 seconds, is the top athlete among 20 females who are travelling to represent the country. The former Excelsior High athlete, now at Baylor University in the United States, is set to compete in the hurdles event.

Mullings, a discus thrower, is the highest ranked Jamaican male athlete going to Nairobi, now placed at number two on the IAAF Top List. The Kingston College student registered a season- and personal-best 66.61 metres in the discus and heads the 21-member men’s team.

The female team will also include the Edwin Allen High twins, Tina and Tia Clayton, with the former expected to compete in the 100 metres event, where she is ranked at number three on the IAAF Top List, with 11.17 seconds.

Olympian Briana Williams heads that list with 10.97 seconds. Despite being eligible for the championships, Williams, who was the double sprint champion three years ago in Tampere, Finland, will not be participating, as her handlers made a decision to compete in only senior meets going forward.

Another notable female down to compete is Hydel High’s Garriel Whyte, who is ranked number four in the women’s 400 metres hurdles, with 57.28 seconds.

The Jamaica team will be hoping to emulate its performance in Finland, when the country ended with 12 medals to finish second behind Kenya and ahead of the United States, which placed third.

Williams, with her double sprint victory, along with 110 metres hurdler Damian Thomas and discus thrower Kai Chang, were the gold medallists for Jamaica.

This time around, the Jamaicans will not have to worry about the United States, as they will not be attending the championships because of the COVID-19 pandemic. Other notable absentees will be Australia, Great Britain and Canada.

The Jamaica team is set to leave the island on Friday.