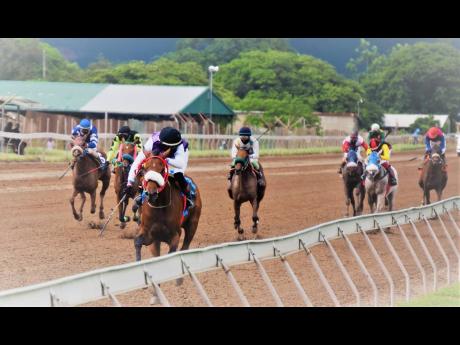 Anthony Minott
AS YOU WISH (foreground), ridden by Matthew Bennett, wins the fourth race over nine furlongs and 20 yards at Caymanas Park on Monday.

IAN Parsard has again flayed the handicapper’s attempt to burden FATHER PATRICK. Though coming in heaviest for Saturday’s Blumenthal Trophy at six and a half furlongs, Parsard, summoning Romario Spencer to claim nine pounds, has all but nullified any advantage the field would have gained at the handicaps.

Carrying 110lb last time out in the Hall of Fame Stakes due to Jordan Barrett’s seven-pound claim, FATHER PATRICK brushed aside PATRIARCH, who was slowly into stride, bid GOD OF LOVE goodbye at the top of the lane and coasted in almost five lengths clear of EAGLE ONE, clocking 1:11.4 at six furlongs.

A month earlier, EAGLE ONE had capitalised on the handicaps, closing from off a cracking pace set by FATHER PATRICK – 34.2, 46.0, 58.0 and 1:11.2 - to land the seven-furlong Eros Trophy in receipt of seven pounds from Parsard’s runner.

For their rematch, EAGLE ONE, who was sitting almost level with FATHER PATRICK in the six-furlong Hall of Fame Stakes, will again have problems trying to match his rival’s speed with only a three-pound difference between them.

FATHER PATRICK should again be the controlling speed, made even more lethal from an inside draw, which he tends to relish. EROY, another of FATHER PATRICK’s long-time rival, was no match at six furlongs in the June 7 Lady Geeta Trophy even though in receipt of 15lb then.

EROY returns 10lb lighter for the rematch after venturing down in class to beat LEGALITY by two lengths at nine furlongs and 25 yards. However, LEGALITY’s follow-up race, third behind DOUBLE CROWN at a mile, poured cold water on EROY’s victory, considering CHINAMAX was second in the event.

FATHER PATRICK continues to look fluent at exercise, six furlongs in 1:16.4 on Sunday. Never mind EROY’s 1:15.3 the same morning. FATHER PATRICK had ripped a bullet 1:14.2 when prepping for the Hall of Fame Stakes.