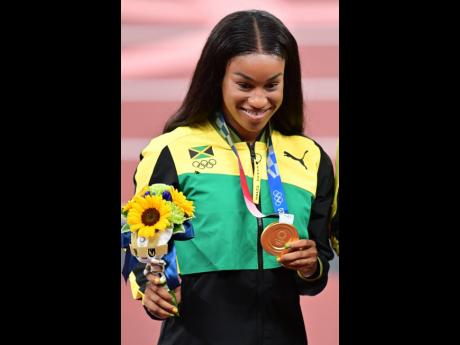 Gladstone Taylor
Briana Williams displays her gold medal during the medal ceremony for the 4x100 metres women’s relay at the Tokyo 2020 Olympics Games, at the Tokyo Olympic Stadium in Tokyo, Japan, on Saturday, August 7, 2021.

Briana Williams says she dedicated her Olympic gold medal to her late grandmother because she was one of the main reasons why she runs for Jamaica. The given name of her grandmother, to whom she often refers as ‘Nana’, or ‘Nenna’, is Vive Colquhoun...

Briana Williams says she dedicated her Olympic gold medal to her late grandmother because she was one of the main reasons why she runs for Jamaica.

The given name of her grandmother, to whom she often refers as ‘Nana’, or ‘Nenna’, is Vive Colquhoun-Simpson. The sprinter said she learnt of her passing after the Olympics.

Williams said she is saddened that her grandmother did get to see her return home with the medal because she is one of the most important persons in her life.

“It’s a regret for me that she didn’t see that happen because she and my mom are the main reasons why I run for Jamaica,” Williams said. “I wanted to honour the two most important women in my life, who have always encouraged me on the track from as long as I can remember.”

Williams, who was born and lives in South Florida, has dual American/Jamaican nationality and could have represented either country. However, in honour of her mother (Sharon Simpson) and grandmother’s Caribbean heritage, and the country’s strong track and field culture, she chose to represent Jamaica. Her father is Steven Williams.

She became the youngest athlete to win the women’s 100 metres and 200 metres double at the 2018 World Under-20 Championships in Tampere at age 16, and earned her spot on the Olympic 4x100-metre relay team after finishing fourth at the National Senior Championships in June.

She told The Sunday Gleaner that the gold medal she received at the Tokyo Olympics would have made her grandmother proud.

“Nana would have been so happy that her own grandchild is an Olympic gold medallist for Jamaica,” Williams said, noting that that gold medal has more meaning to her now because it is in honour of her grandmother.

“So, in some way, my medal has even more significance to me now, this is definitely dedicated to her,” Williams said.

Williams announced Colquhoun-Simpson’s death on Monday via a social media post, sharing that while she had passed before her relay participation at the Olympics, she was not notified until afterwards, as her family did not want her passing to impact her Olympic participation.

“Just got and found out that my dear grandmother, who lived with us, passed away soon after I left for the Olympics,” Williams shared in a post-Games post. “They wisely decided to wait until after Tokyo to tell me. I dedicate my Olympic gold medal to her memory and for all she poured into me. Sleep well, Nenna. Thank you.”