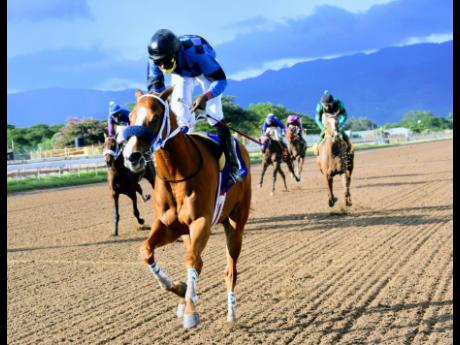 HOIST THE MAST, who avoided SHE’S A WONDER and the rigours of the 10-furlong Jamaica Oaks, instead facing stablemate GO DEH GIRL two days later over the straight course, should use her pace to outclass rivals at seven and a half furlongs in Saturday’s fourth event.

The speedy filly had put in a bullet work on the round course, July 31, five furlongs in 1:00.3, in what appeared to be her final speed gallop for the Oaks a week later. However, with SHE’S A WONDER confirmed for the Oaks instead of the derby, HOIST THE MAST seemingly took a U-turn, opting for the straight event, which she led for four furlongs before running down to mid-track, surrendering to GO DEH GIRL.

Brought back against opposition which she can use her speed to overwhelm, as she did at six furlongs on July 12, flooring NUCLEAR NOON by two and a half lengths, among the runners HOIST THE MAST faces is ACTION ANN, who she had beaten out of sight in that event.

Runner-up to SHE’S A WONDER in April’s Thornbird Stakes at seven furlongs when in tip-top shape, ACTION ANN took her chances in the Oaks after finishing 13 lengths behind HOIST THE MAST at six furlongs.

ACTION ANN actually chased an easy-going SHE’S A WONDER down the backstretch in the Oaks. However, she was relegated coming off the home turn by SWEET MAJESTY, suggesting she is way off her early season Hot Line and Thornbird Stakes form, possibly why Omar Walker has jumped ship for HOIST THE MAST, abandoning ACTION ANN, who he was astride five consecutive times while she was at her best.

AWESOME CHOICE had tried pressing HOIST THE MAST on July 12 but was no match, which should again be the case, leaving Anthony Nunes’ runner all but undisturbed on the lead. Jason DaCosta’s tag team of GENTLE GIANT and United States-bred I AM FRED has a clear-cut plan to get Nunes’ filly off the bridle early but that’s easier thought than done.

GENTLE GIANT’s two victories were at five furlongs straight, facing no fearsome speed. He will come in light at 110lb due to Matthew Bennett’s claim but still has much to do against HOIST THE MAST, who isn’t that heavy at 117lb and can maintain a stinging pace for at least seven furlongs.

I AM FRED closed from off the pace last time out to mow down stablemate BATON ROUGE at six and a half, ridden out to win by a half-length. It was a workmanlike performance by the foreigner, who will relish the extra furlong. However, it should be noted that I AM FRED’s winning time, 1:22.1, wasn’t too far off the 1:22.3 clocked by BUFF BAY, who beat maidens at the distance two races earlier that afternoon.