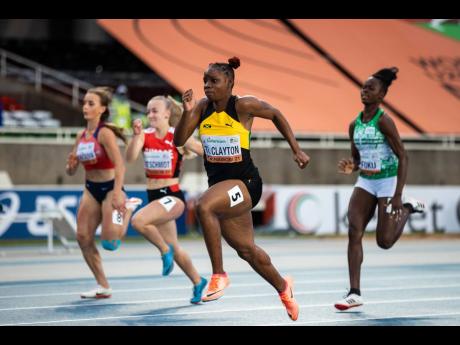 Â© Dan Vernon for World Athletics
Jamaica’s Tina Clayton (second right) powering to victory in the women’s 100 metres final at the World Under-20 Championships in Nairobi, Kenya, yesterday. Clayton won in a personal best 11.09 seconds. Zimbabwe’s Beatrice Masilingi (not in photo) was second in 11.39 and Switzerland’s Melissa Gutschmidt (second left) third in 11.51.

The Edwin Allen High School star, who turned 17 on Tuesday, clocked a personal best of 11.09 seconds, just six-hundredths of a second outside the meet record set by the USA’s Twanisha Terry in Tampere, Finland, three years ago.

The win ensures that Jamaica now owns all the Women’s 100m sprint titles at a global level as Elaine Thompson Herah is the Olympic 100m champion, and Shelly-Ann Fraser-Pryce is the Women’s 100m World Championship gold medallist. Jamaica also retains its title won in Tampere by Briana Williams.

Clayton’s time now makes her the joint third-fastest Jamaican at the Under-20 level with Ackera Nugent, behind Williams (10.97s), and Kiara Grant (11.04s).

Clayton got a flying start and powered away from the field to register a clear victory margin by about 5m.

Despite this, however, she was expected to get a run for her money from Namibia’s Beatrice Masilingi, who qualified after her 11.35s semi-final win and who had posted a national Junior record of 11.20s in the preliminary round the previous day.

Clayton says she was positive about finishing on the podium.

“I feel real good with my win today,” she said after the race. “I expected a medal because the event was competitive, but to get the win, and the gold medal, I am very elated. I worked on my starts a lot with my coach before the final because I was left in the blocks in the semi final — and it paid off.”

Her high school coach, Michael Dyke, who is also a member of the coaching staff in Nairobi, is elated.

“I am extremely proud of Tina because she really worked hard for this one as this is something we had planned for,” he said. “The COVID pandemic was a blessing in disguise as there were not many meets and she just did enough to win at [the ISSA/GraceKennedy Boys and Girls’ Athletics Championships]. I just want to thank all those people who made this happen and a special big up to her sister Tia, who despite not competing in an individual event, was there for her.”

This is Dyke’s first success at this level despite attempts from Kevona Davis and Christania Williams on previous occasions.

In another final involving a Jamaican athlete yesterday, thrower Kobe Lawrence finished eighth in the Men’s Shot Put with a heave of 18.32m.

The Jamaicans had a better showing yesterday than Day One as all the athletes involved moved on to the next round of their events.

Garriel White won Heat Two of the Women’s 400m Hurdles, finishing in 58.65 seconds, to advance as the fourth fastest overall.

On the men’s side, Roshawn Clarke won his heat in a personal best 50.93s to qualify for the semi-final second fastest overall behind Authorised Neutral Athlete Denis Novoseltsev (50.88s).

Devontie Archer, the other Jamaican in the event, also won his heat. His time of 52.17s places him in the semis as seventh fastest overall. The semi-finals take place on Saturday at 3 p.m. (7 a.m.)

Chevonne Hall, Jamaica’s lone Men’s 800m runner, booked his spot in his semi-final with a third-place finish in his heat. His time of 1:49.47 minutes ranks him 11th fastest overall heading into the next round. The semi-final will be on Saturday at 3:30 p.m. (7:30 a.m.).

Ackelia Smith advanced to the Women’s Triple Jump final although she was not an automatic qualifier. She finished third in Group B, qualifying with a distance of 12.99m. The final takes place today at 2:25 p.m. (6:25 a.m. Jamaica time).

The Women’s Discus Throw final, featuring Jamaica’s Cedricka Williams, was postponed from yesterday to today because of a weather delay. It takes place at 11:05 a.m. (3:05 a.m.)