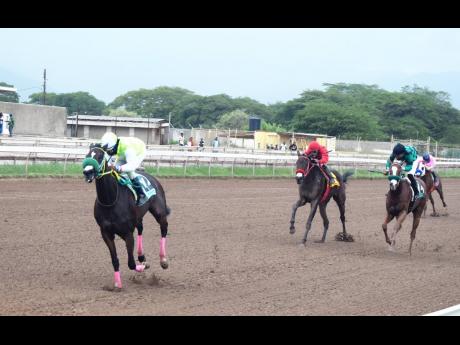 LABYCKA rebounded from her dismal run in the August 7 Jamaica Oaks, making every post a winning one for trainer Steven Todd in the Caymanas Park 1959 at a mile yesterday.

Running with only 105lb under lightweight claiming rider Jordan Barrett, LABYCKA reproduced the form she had used to beat maidens by almost 10 lengths on her second start before going in over her head, three weeks later, to take on the best three-year-old fillies, sitting level at 126lb in the 10-furlong Oaks.

Having already shown her worth at exercise in a rushed preparation for the Oaks, LABYCKA was hustled to lead from the start and saw off a persistent challenge from THREE TIMES LUCKY, who chased relentlessly but had to concede a three and a half length defeat to her quicker rival.

LABYCKA clocked 1:39.2 at odds of 5-2 on a fast track, sealing a two-timer for Barrett, who had earlier won the third astride 9-5 chance APRIL SPIRIT in the third at five and a half, taking over PINDERS VALLEY coming off the home turn.