‘Not my best race’

Fraser-Pryce critical of performance in spite of PB of 10.60 seconds in Lausanne Diamond League 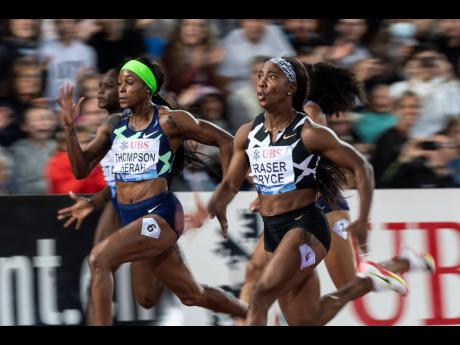 Ever the perfectionist, Shelly-Ann Fraser-Pryce says she could have done better, in spite of running a personal best in the 100m at the Wanda Diamond League in Lausanne, Switzerland, yesterday. It was a day when all eyes were on the Olympic...

Ever the perfectionist, Shelly-Ann Fraser-Pryce says she could have done better, in spite of running a personal best in the 100m at the Wanda Diamond League in Lausanne, Switzerland, yesterday.

It was a day when all eyes were on the Olympic champion Elaine Thompson Herah who was also in the race, as it was believed she could have broken the world record on that track at the Stade Olympique de la Pontaise, notorious for fast times.

However, the Tokyo Olympics silver medallist, Fraser-Pryce, was the one to garner all the attention at the end of the day.

She came into the Wanda Diamond League meet yesterday as the third fastest woman in history, but further emphasised that claim when she lowered her personal best (PB) to 10.60 seconds for victory.

Fraser-Pryce overcame frigid conditions to also clock a meet record, shattering the 10.72s set on the track by American Marion Jones in 1998. The only two faster times are that of the late American sprinter Florence Griffith Joyner, who clocked 10.49s in 1988, and Thompson Herah, who clocked 10.54s for a Jamaican national record in Eugene, Oregon on Saturday.

In spite of the feat, Fraser-Pryce says there’s still work to do.

“I’m feeling good to [set a] PB tonight,” she said after the race. “It was cold, but I still came out here to do my job. Believe it or not, I still have not run my best race. I know there is more to give because I still need to work further on perfecting my technique. There will be more from me this season, and certainly my goal is to break into the 10.5 range. The crowd in Lausanne was amazing as usual!”

Those sentiments are not unfamiliar from the Fraser-Pryce camp. When she clocked 10.63s at the Destiny Series Meet at the National Stadium on Saturday, June 5, Fraser-Pryce then held the national record. However, her coach, Reynaldo Walcott, promised a day later that he could get a better performance than that out of her.

Like in Tokyo, at the Olympics, and in Eugene on Saturday, there was another one-two-three finish for the Jamaicans yesterday. Thompson Herah claimed second in 10.64s, and Tokyo bronze medallist Shericka Jackson was third in 10.92s.

Thompson Herah, who also ran 10.61 just under a month ago, says these performances have now taken a toll on her.

“My body is feeling tired after a long season and especially after having done personal bests four times in a month, so that’s amazing for sure,” she said. “I have no plans to break the world record and I never thought of getting so close. I’m simply going to continue working hard, finish this season strong, and come back even stronger next season.”

Fraser-Pryce will next be in action at the Paris Diamond League meet tomorrow.

Earlier in the day, Jamaican Candice McLeod clocked 51.26s for fifth in the women’s 400m race. It was won by Olympic Games silver medallist Marileidy Paulino of the Dominican Republic in 50.40s. Barbados’ Sada Williams was second in 50.77s and the USA’s Quanera Hayes third in 51.06s.

Hansle Parchment, the Olympic champion, lost momentum after clipping a hurdle and placed eighth in 13.58s.

The Jamaican duo of Janieve Russell (54.89s) and Leah Nugent (56.41s) were sixth and seventh respectively in the women’s 400m hurdles race. It was won by Tokyo Games bronze medallist Femke Bol, of the Netherlands, in a meet record of 53.05s. USA’s Shamier Little (53.78s), Ukraine’s Anna Ryzhykova (54.32s), and Olympic Games silver medallist Dalilah Muhammad (54.50s), of the USA, were second, third, and fourth, respectively.

Shanieka Ricketts, the national triple jump champion, was second as well on the day. She cut the sand at 15.02m, with a wind reading of +2.7m per second, therefore not a personal best, to finish behind Olympic champion and world record holder Yulimar Rojas of Venezuela, who won with a distance of 15.56m. Irsael’s Hanna Minenko (14.47s), and Jamaica’s Kimberly Williams (14.29m) were third and fourth, respectively.