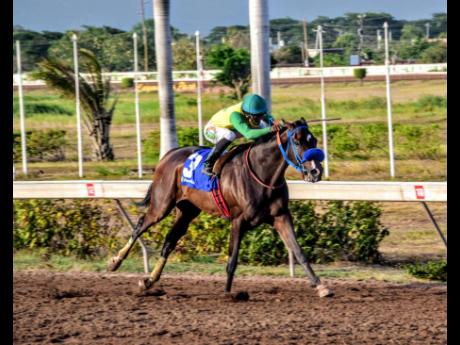 BIG JULE entered the August 7 Jamaica Derby as the least-prepared runner, yet he was three-in-a-row with CALCULUS and BILLY WHIZZ, turning for home behind FURTHER AND BEYOND, before weakening, zigzagging a furlong and a half out, on what was only his fourth outing.

Fast-forward three weeks later, and BIG JULE was upside his stablemate, the country’s most lethal middle-distance runner, MAHOGANY, galloping 1:28.1 for seven furlongs last Sunday morning, light years faster than the 1:32.0 he had recorded a week before the derby.

Pitted against derby runner-up BILLY WHIZZ in Saturday’s Winston ‘Fanna’ Griffiths Classic at the new nine and a half furlong trip, a better-prepared BIG JULE returns in receipt of nine pounds from his rival with whom he had sat level at 12 furlongs.

BILLY WHIZZ flexed his muscles last Saturday morning, seven furlongs in 1:29.2, coming out of the derby, his 11th outing, compared with the relatively inexperienced BIG JULE, who has emerged from the marathon a different horse at exercise.

In addition to being underprepared for the derby, BIG JULE was drawn widest in the 10-horse field and kept outside by FURTHER AND BEYOND for almost four furlongs, to the clubhouse turn, where he had to be slightly snatched up by Omar Walker to avoid clipping heels with BILLY WHIZZ.

Switched outside down the backstretch, BIG JULE went third five furlongs out, going by BILLY WHIZZ, to chase FURTHER AND BEYOND and CALCULUS, who he relegated at the three pole, improving into second. However, BIG JULE weakened off the turn and was rejoined by CALCULUS and BILLY WHIZZ, who both went on to challenge FURTHER AND BEYOND in a driving finish a half-furlong out.

After a rough first half-mile, and six promising furlongs, BIG JULE showed enough in the derby, followed by his glowing exercise report, to be the first horse to win at nine and a half furlongs in his rematch with BILLY WHIZZ.

Having clocked 1:57.4 at nine furlongs and 25 yards on his third outing in June, winning by 18 lengths, before going lame and subsequently ill, resulting in an abbreviated derby preparation, BIG JULE should certainly enjoy the new trip.

The derby was BILLY WHIZZ’s first route race, which he handled well, losing by a neck to CALCULUS, who outstayed him and FURTHER AND BEYOND. Carrying topweight 126lb, he will be pit in a match race with BIG JULE, who seemingly has a better turn of foot and a nine-pound advantage to take him home.