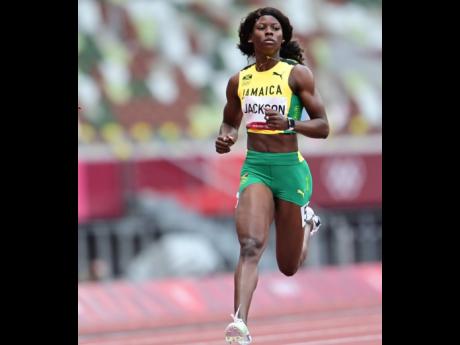 Shericka Jackson will feature in her first 200m race since the Tokyo Olympic Games last month when she takes the track in the Wanda Diamond League in Brussels, Belgium, this afternoon.

Jackson, the Olympic Women’s 100m bronze medallist, was eliminated from the opening round of the 200m event because of an error in judgement. Jackson, who was cruising through her heat, slowed down towards the line and was passed for a top-three spot, finishing fourth in her heat. It was a bizarre finish to the event for her, but she then explained that she had been tracking her opponents on the stadium screen but did not realise that the footage was delayed.

Now, she becomes one of the headliners of the race, with the withdrawal of Elaine Thompson Herah, the Olympic champion over the distance. She will come up against the Tokyo silver medallist, Christine Mboma, an 18-year-old of Namibia, who also won gold over 200m at the World Athletics U20 Championship in Nairobi, Kenya, last month. Her personal and season’s best of 21.81 seconds, a hundredth of a second faster than Jackson’s, was set in the Tokyo final.

Mboma’s national teammate, Beatrice Masilingi, also an Olympic finalist, is also in the race. Masilingi, 19, was the silver medallist behind Mboma in Kenya.

Also set for action is reigning world champion Dina Asher-Smith of Great Britain, with a personal best of 21.88s. She pulled out of the event in Tokyo because of injury.

However, all eyes may be on the United States’ Sha’Carri Richardson, who will be running her first 200m race since serving a doping ban for cannabis in July. Richardson finished in ninth place the last time she was on the track, in the Prefontaine race featuring Jackson, and will be looking to silence her critics who have since taunted her through memes and other forms of banter on social media. However, she says she has handled the criticism that she has faced well.

“The media are part of it,” she said in a report on the Wanda Diamond League website. “If you perform well as an athlete, you’re a hero, and if you don’t, or you go against what’s expected of you, they spit you out.

“I would call it a love-hate relationship, but I believe in positivity, so I prefer love. I try to live in my own world as much as I can, so I can shut myself off from what others say about me. I’m the sixth-fastest sprinter of all time, and I know the best is yet to come.”

Sprint hurdler Danielle Williams will also be in action on the day, looking to follow up on her season’s best run of 12.50s in the women’s 100m hurdles race at the Paris leg of the Diamond League last week. She will come up against Jamaica’s bronze medallist in the event in Tokyo, Megan Tapper, who was third in Paris.

Olympic 400m finalist Christopher Taylor will be involved in his first Diamond League event of the season, facing Olympic bronze medallist Kirani James of Grenada and the US’ Michael Cherry. Taylor is the only Jamaican to go below 45 seconds this season, clocking a personal best 44.79s in Tokyo.