Rutherford too much for Tallawahs 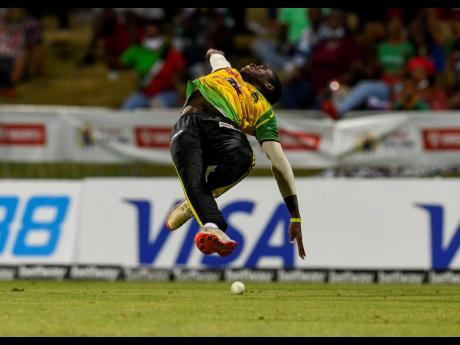 Sherfane Rutherford once again provided his Midas touch, lashing his third half-century in four innings as St Kitts and Nevis Patriots stormed to their fourth straight win to consolidate their position at the top of the Caribbean Premier League (CPL) standings here on Wednesday night.

In pursuit of a competitive 167, Patriots made light work of their target to win by six wickets, with 14 balls remaining, to continue as the only unbeaten side on eight points.

The left-handed Rutherford was once again at the forefront of the Patriots run chase, hitting an unbeaten 50 off 26 balls, with two fours and four sixes, to follow up scores of 53, 14 and 58 not out in his last three innings.

“Coming into this tournament I told myself I have a responsibility, and being given the opportunity to bat up the order is something I always wanted,” said Rutherford, who has been his side’s leading scorer this year after a poor campaign for Guyana Amazon Warriors last year.

“So I think that’s where the [form] has come from, that hunger, and the greed to score runs; because after last year there were some rough times for me, so I gave myself the best chance [of succeeding] by training hard.”

The victory never appeared in any doubt, with Evin Lewis smashing 39 from 27 balls, including two fours and four sixes, to post 42 off 27 deliveries for the first wicket with Devon Thomas (12).

Lewis put on another 30 for the third wicket with Ravi Bopara (18), who then added 42 for the fourth wicket with Rutherford.

“I think we were 20 runs short and it’s a pretty good wicket, but credit has to be given to the Patriots, because I think they bowled very good in the last five overs or so,” said Tallawahs captain Rovman Powell.

“And I think as a bowling group we lost the plot at the end.”

Sent in, Tallawahs rallied to 166 for eight, with Carlos Brathwaite top-scoring with a 16-ball 27, inclusive of a couple of fours and sixes, Chadwick Walton getting 26 off 25 balls, and Powell chipping in with 24 off 27 balls.

The best stands of the innings came when Walton and Kennar Lewis (13) posted 41 for the first wicket, and Brathwaite and Powell put on 47 for the fourth wicket.

J James not out 3

F Edwards not out 2

S Rutherford not out 50