‘Next year, the world record’ 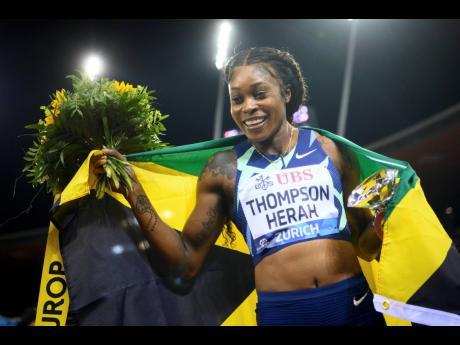 Jamaican sprinting titan Elaine Thompson Herah is putting together a body of work that might very well leave her peerless - if you believe she isn’t already without equal, in a few more competitive strides, after a stunning win in the 100m at the Diamond League finale in Zurich, Switzerland.

That was how the 29-year-old back-to-back Olympic double-sprint champion described her season after she stopped the clock at 10.65 seconds for her fourth sub-10.70 clocking this season. No one has ever registered so many times faster than 10.70 seconds in history, let alone in a single season.

For Thompson Herah, it’s now all about further cementing her legacy and adding to her already glistening CV with one glaring target squarely in her cross-hairs.

“This year, it was a long season with ups and downs, but next year, the world record is definitely on my mind,” Thompson Herah teased after her Zurich sparks in reference to Florence Griffith-Joyner’s controversial 10.49 seconds standard.

“It has been a crazy season, a long one and a tiring one. I was so consistent because I was just keeping the faith in me and did not allow any negativity. I am really happy and grateful. I am tired now, but this is my job. I would describe this season with one word: amazing, yet it had ups and downs. I have to give God thanks that I am healthy and that I could finish such a long season,” Thompson Herah added.

To put Thompson Herah’s dominance in further perspective, from her 17 starts in the 100m this season, the Jamaican has only been beaten to the line twice – at the National Senior Championships and at the Lausanne Diamond League.

For her efforts, Thompson Herah walked away with US$30,000 ($4.5 million), the Diamond Trophy, as well as a provisional wild card entry for next year’s World Championships in Eugene, Oregon.

Defending world champions also receive wild card entries, and with Shelly-Ann Fraser-Pryce the defending champion in the event from her Doha 2019 success, it is likely that Fraser-Pryce will receive Jamaica’s bye, with each country only allowed a single wild card for each event even if more than one athlete is ‘eligible’.

In the 200m, Shericka Jackson registered her best-ever time in the event, clocking 21.81 seconds for second place behind Namibia’s 18-year-old Olympic silver medal winner, Christine Mboma, who took the win in 21.78 - a World Under-20 record as well as an African record. Asher-Smith was third in 22.19.

Natoya Goule finished third in the 800m with a time of 1:58.34, the same time as second-place Kate Grace from the United States, with Great Britain’s Keely Hodgkinson, 1:57.98, taking the win.

Tapper, the Olympic bronze medal winner, in the end crossed the line in third place in a time of 12.55 seconds to continue her consistent top three finishes on the circuit.

In the women’s 400m, Stephenie-Ann McPherson, 50.25m, had to settle for fourth place, one in front of Candice McLeod, 50.96, with American Quanera Hayes, 49.88, taking the win ahead of the Dominican Republic’s Marileidy Paulino, 49.96, the Olympic silver medal winner, with Barbados’ Sada Williams, 50.24, ending up in third.

Janieve Russell struggled in the women’s 400m hurdles event, finishing seventh in 55.74 as Femke Bol, 52.80, from the Netherlands, ran away with the win ahead of American Shamier Little, 53.35, and Ukraine’s Anna Ryzhykova, 53.70, taking full advantage of the absence of American duo Sydney McLaughlin, the Olympic champion and world record holder as well as world champion Dalilah Muhammad